Home > Back to Search Results > Trial of Frank James... Attempt to kidnap the President...
Click image to enlarge 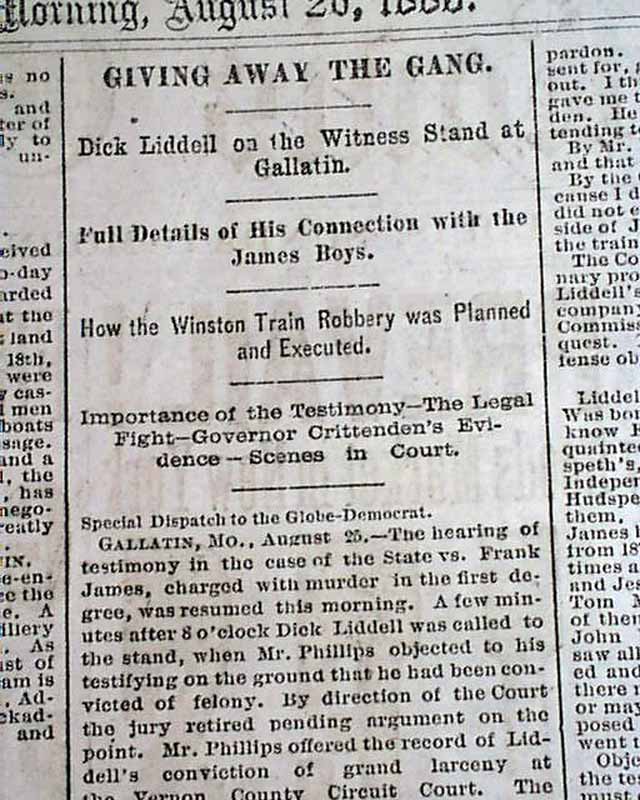 Trial of Frank James... Attempt to kidnap the President...

Almost half of page 2 is taken  up with a fine & very detailed account of the murder trial of Frank James, brother of outlaw Jesse James. The report begins: "The hearing of testimony in the case of the state vs. Frank James, charged with the murder in the first degree, was resumed..." with much, much more. Some of the subheads include: "How Liddell Looks" "Counsel For the State" "Opinion of The Court" "Frank & Jesse" "Liddell's Testimony" "Captured a Couple" "Jesse Was Killed" "Plan for the Robbery" "Jesse Got Sick" "We Went to Kansas City" and even more.
An interesting & unrelated article on pg. 4 is headed: "Western Outlaws" "A Band of Cowboys Organized for the Purpose of Kidnapping the President" "Half a Million Ransom to be Demanded..." and more (see).
Sixteen pages, very nice, clean condition.