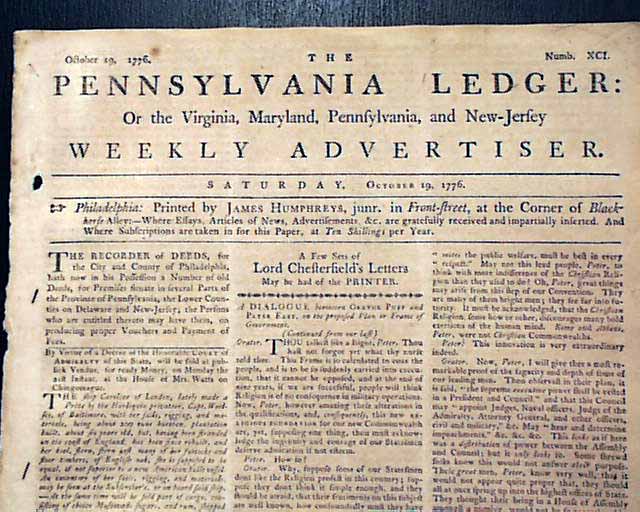 This was a decidedly Tory newspaper, supportive of the British efforts in America. This newspaper ended publication in June, 1778 when the British evacuated the city.
Page 2 has a letter from "A soldier" mentioning: "As the public have, no doubt, received many contradictory accounts relative to the unfortunate attempt against Quebec on the 31st December last...I have sent you for publication the following sketch of that morning's transaction..." with more. And what follows is a lengthy & detailed account of Benedict Arnold's failed attempt to capture the city of Quebec taking over a full column, including mention of Arnold being wounded.
War-related reports continue on pg. 3 as well with an item beginning: "By express from General Lee at Amboy...we learn that the enemy had evacuated Staten Island and that our people had taken possession of it." Also a letter from Harlem has a nice military account: "Yesteryear morning about 4000 of the enemy landed at Faggs, or Foggs Point in the Sound...a detachment was immediately sent to oppose them. The enemy got possession of the point...had made  no further progress..." with more.
Four pages, numeric notations in margins next to ads, very nice, clean condition.