Home > Back to Search Results > General Howe proclamations in a Tory newspaper... The latest war news...
Click image to enlarge 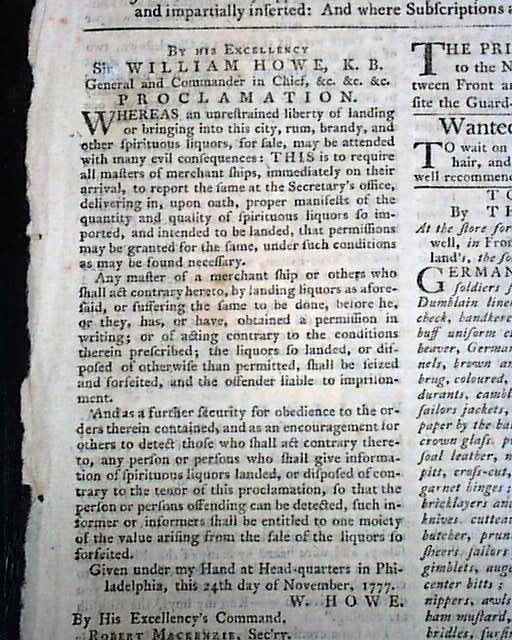 
THE PENNSYLVANIA LEDGER OR THE WEEKLY ADVERTISER, Philadelphia, Nov. 26, 1777

This was a strongly Tory newspaper published in Philadelphia when the British were in occupation. It began in 1775 and ended when the British evacuated the city in May of 1778. Not surprisingly, the masthead features an engraving of the Royal coat-of-arms.
The first column on the front page features two "Proclamations", each signed in type by: W. Howe, one concerning punishment for the destruction of property by British soldiers in the Philadelphia vicinity.
Page 2 has several reports concerning the Revolutionary War including a letter from Fort Montgomery and a letter from Esopus concerning a skirmish near there. Another report includes: "...the Rebels at Red-Bank, horribly panic struck at the loss of their fort on Mud Island...blew up their magazine & fled from the fortifications which they had been preparing for these 6 or 7 weeks...depending entirely on the nimbleness of their heels for their safety...cry with the greatest vociferation 'Damn you drive on--drive on--Run my boys, the English are coming.' " plus more. There is also an interesting tongue-in-cheek report concerning: "Was LOST, on Thursday last, by the printer hereof, a Rebel Newspaper printed at Baltimore, containing...a pompous Congress account of the number of prisoners taken by Gen. Gates which they have swelled to the amount of 6013..." with more.
Page 3 has a letter beginning: "That the revolted colonies neither intended or desired to be independent appeared to me a position so extravagant...I make no doubt the colonists were very willing to retain their claim to the protection of Great Britain..." with more. Also a "Proclamation" signed by: W. Howe, concerning offering pardon to those who deserted the service of the King. Let another "Proclamation" signed by: W. Howe, offering land to those who will enlist in the King's service.
Four pages, numeric notations next to ads (this was the editor's copy), light damp stain to a lower corner, very nice condition.