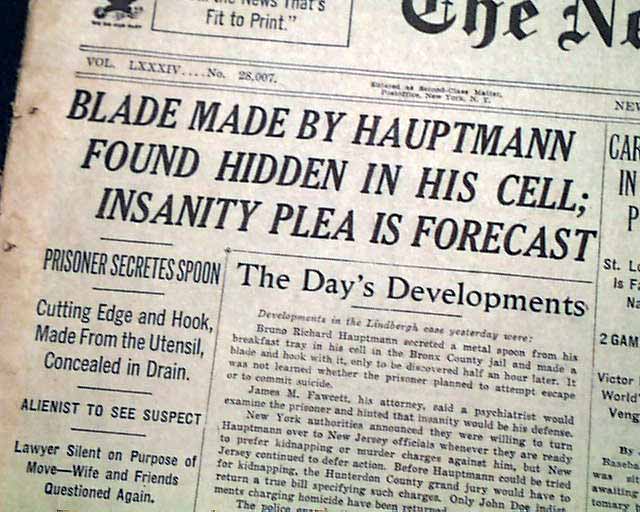 This 34 page newspaper has a three column headline on the front page: "BLADE MADE BY HAUPTMANN FOUND HIDDEN IN HIS CELL; INSANITY PLEA IS FORECAST" with many subheads. Much more inside.

wikipedia notes: Hauptmann was charged with kidnapping and murder. Conviction on even one charge could earn him the death penalty. He pleaded not guilty.

Held at the Hunterdon County Courthouse in Flemington, New Jersey, the trial soon became a sensation: reporters swarmed the town, and every hotel room was booked.

Based on the forensic work of Arthur Koehler at the Forest Products Laboratory, the State also introduced photographic evidence demonstrating that the wood from the ladder left at the crime scene matched a plank from the floor of Hauptmann's attic: the type of wood, the direction of tree growth, the milling pattern at the factory, the inside and outside surface of the wood, and the grain on both sides were identical, and two oddly placed nail holes lined up with a joist splice in Hauptmann's attic, a remarkable piece of forensic detection. The ladder is now on public view in the New Jersey police museum.

Additionally, the prosecutors noted that Condon's address and telephone number had been found written in pencil on a closet door in Hauptmann's home. Hauptmann himself admitted in a police interview that he had written Condon's address on the closet door: "I must have read it in the paper about the story. I was a little bit interested and keep a little bit record of it, and maybe I was just on the closet, and was reading the paper and put it down the address." When asked about Condon's telephone number, he could respond only, "I can't give you any explanation about the telephone number."

The defense did not challenge the identification of the body, a common practice in murder cases at the time designed to avoid exposing the jury to an intense analysis of the body and its condition.
Lindbergh on the witness stand

Hauptmann was ultimately convicted of the crimes and sentenced to death. His appeals were rejected, though New Jersey Governor Harold G. Hoffman granted a temporary reprieve of Hauptmann's execution and made the politically unpopular move of having the New Jersey Board of Pardons review the case. Apparently, they found no reason to overturn the verdict.

Hauptmann turned down a $90,000 offer from a Hearst newspaper for a confession and refused a last-minute offer to commute his execution to a life sentence in exchange for a confession.

He was electrocuted on April 3, 1936 just over four years after the kidnapping.