Home > On the coronation of King George I...
Click image to enlarge 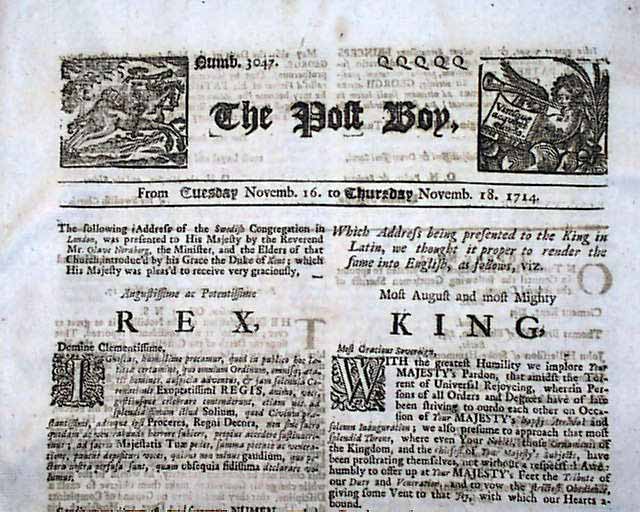 On the coronation of King George I...

* George I of Great Britain
* Coronation as king

Unusual in that the front page has an address to the newly coronated King George I from the Swedish Congregation in London, both in Latin & in English, headed in large type: "REX" and "KING" respectively. Page 4 has a report from Swansea, Wales, on a coronation parade in that town held the day after the actual coloration in London (October 21) with various particulars mentioned including: "...the bells began to ring the musick play'd round the town & at the dawning the drums followed...At eight the marker was hung round with scarlet intermixt with sprigs & flowers of gold..." with much more on the parade (see).
Page 3 has a curious item from Paris of a young abbot, just 9 1/2 years old, who preaches: "...a very fine discourse & was admired by all that heard him. He is a prodigy of wit having now preach'd these 4 years & even several times before the King..." with more (see).
An unusual 6 page issue with the back page entirely blank. Measures 8 1/2 by 14 inches, two very nice engravings in the masthead, great condition.