Home > Back to Search Results > An Oxford edition of The Oxford Gazette... A great rarity...
Click image to enlarge 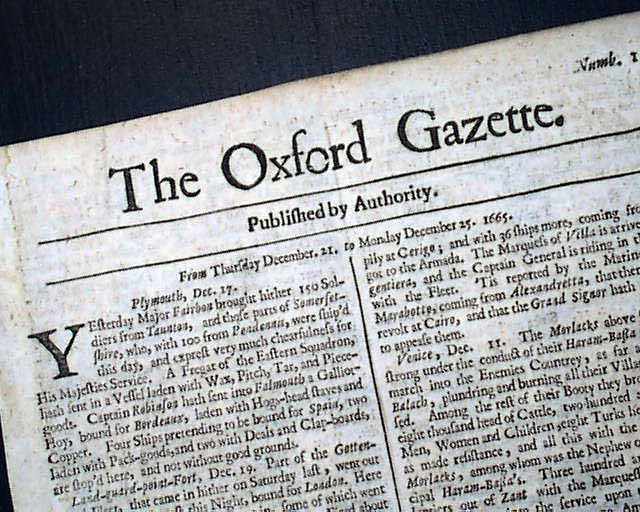 An Oxford edition of The Oxford Gazette... A great rarity...


THE OXFORD GAZETTE, Oxford, England, Dec. 25, 1665  This is an extremely famous--and rare--title, being the predecessor of the famous "London Gazette", the oldest continually published English language newspaper in the world. Because of the Plague at this time, the Royal Court had removed itself from London to Oxford when this newspaper began, so issues #1 thru #23 were published in Oxford (actually published simultaneously in London & Oxford), and when the contagion had subsided & the Court returned to London this newspaper went with it and renamed itself "The London Gazette" with issue #24, and the rest is history. The London Gazette still publishes to this day. This is issue number 12.
Of particular significance is that this is an actual Oxford printing, as virtually all issues of this title were the London edition (but printed on the same day: see: Handover's "A History of The London Gazette 1665-1965"). As would be expected, with most libraries & institutions being in London, holdings coming to surface today would be the London edition. This Oxford edition--note that the imprint at the bottom of the back page simply says: "Oxford, Printed by Leonard Litchfield, Printer to the University, 1665" rather than the lengthier imprint found on the other issues--is one of only two or three I have seen in 38 years. The text is the same however the type size of the  title is a bit smaller in this, the Oxford edition (see).
Although any content pales in comparison to the rarity of this edition, the back page does have a report from Westminster noting: "We have very great hope of a considerable decrease of the Plague this week, having had only four dead in our Parish since Monday last."
Complete as a single sheet newspaper measuring 6 1/2 by 11 1/8 inches, very nice condition.