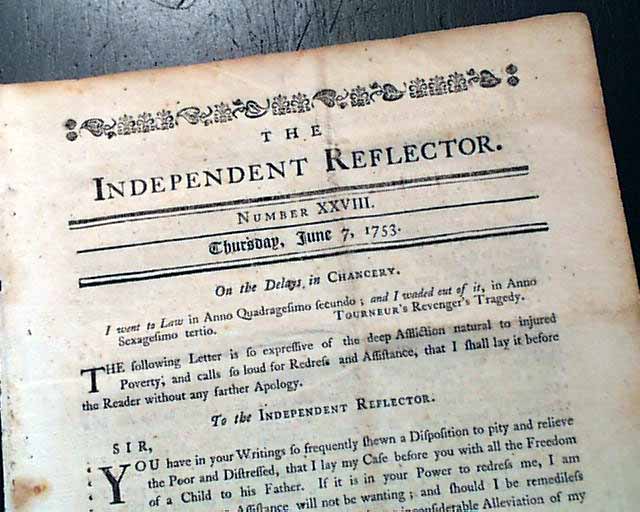 
THE INDEPENDENT REFLECTOR, New York, June 7, 1753  This rare newspaper lasted for less than one year, publishing but 52 issues. Primarily moral and political essays, it gave offense to men in power and was "suppressed by authorities", as Brigham relates.
As noted in a book published exclusively about this periodical, this was one of the most important publications of 18th century America. The Independent Reflector writers were young, well-educated lawyers who led an antigovernment clique in New York determined to oppose any tendency of the administration to extend its power. The Reflector urged reforms of all sorts--in the practice of medicine, in methods of fire control, in the constabulary, and in the judiciary. But its greatest fight, which ultimately led to its suppression, was its battle to oppose the establishment of a college in New York controlled by the Church of England & supported by public funds.
This four page issue is focused on a lengthy letter prefaced with: "The following letter is so expressive of the deep affliction natural to injured poverty & calls so loud for redress and assistance that I shall lay it before the reader without any farther apology."
This is a fine opportunity to purchase at a reasonable price a very early issue--over 260 years old--by James Parker from the colonial press of New York. American titles from the 1750's are rarely found making this perhaps the earliest American imprint in your collection.
Measures 6 3/4 by 10 3/4 inches, nice condition.