Home > Back to Search Results > Comments on the "Wild West" in the President's address...
Click image to enlarge 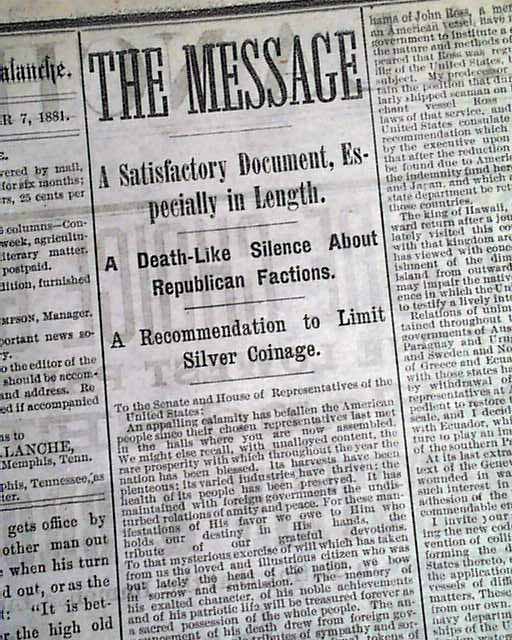 Comments on the "Wild West" in the President's address...

* President Chester A. Arthur
* State of the Union Address

Pages 2 and 3 containing the complete printing of President Chester Arthur's annual state-of-the-union address, headed: "THE MESSAGE" with other heads: "A Satisfactory Document, Especially in Length" "A Death-Like Silence About Republican Factions" "A Recommendation to Limit Silver Coinage". Within the lengthy document is some text which relates to the "Wild West" including: "...The surrender of Sitting Bull and his force upon the Canada frontier has allayed all apprehension, although bodies of British Indians still cross the border in question of sustenance..." and further on is reference to the gunfight at the O.K. Coral with: "...attorney general also calls attention to the disturbance of the public tranquility during the past year in the territory of Arizona. A band of armed desperadoes known as 'cowboys', probably numbering from fifty to one hundred men, have been engaged for months in committing acts of lawlessness and brutality which the local authorities have been unable to repress. The depredations of these cowboys have also been extended into Mexico...".
Complete in four pages, very large folio size, some minor margin tears, a bit irregular at the spine.