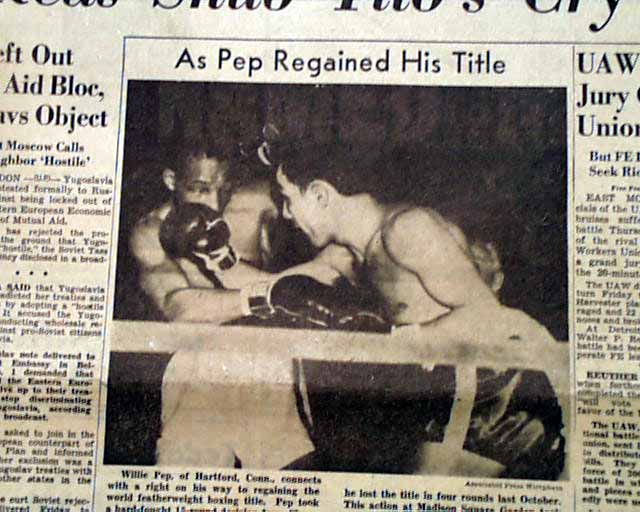 The front page has a three column photo with caption: "As Pep Regained His Title". Also a six column headline on page 16 reads: "Pep Regains Title in Bloody Battle" with subheads and photo of Pep. This is 1st report coverage on Willie Pep winning back the World's featherweight championship by beating Sandy Saddler in a 15-round decision.

Other news, sports and advertisements of the day. Complete in 24 pages, small binding holes along spine, otherwise good condition.

wikipedia notes: Guglielmo Papaleo (September 19, 1922 - November 23, 2006) was an American boxer who was better known as Willie Pep. Pep fought a total of 242 bouts during his 26 year career, a considerable number of fights even for a fighter of his era. His final record was 230-11-1 with 65 knockouts. Pep, known for his speed and finesse, is considered to be one of the best fighters of the 20th century and was inducted to the International Boxing Hall of Fame in 1990. There is currently a racehorse named Willie Pep in training with Charles Egerton.