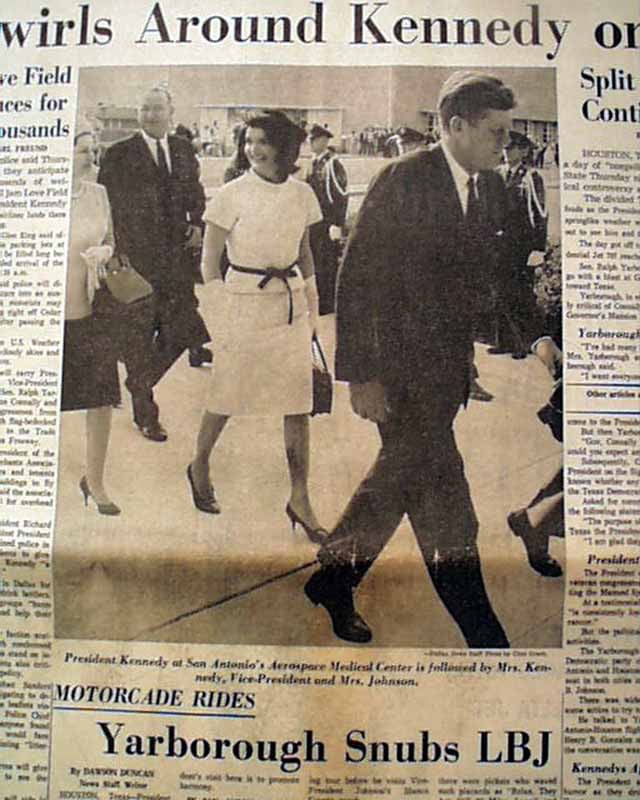 
THE DALLAS MORNING NEWS, Texas, Nov. 22, 1963  Of the many newspapers saved by people on the assassination of President Kennedy, this would be one not logically saved. Although it is from the day of his death and from the city where he was shot and died, being a morning newspaper it reports his arrival in Texas and his ensuing visit to Dallas with the headline reading: "Storm of Political Controversy Swirls Around Kennedy on Visit".  At the bottom of the front page is a map of the: "Presidential Motorcade Route". There is no report concerning the assassination as it would not happen until later in the day.
This issue also includes the controversial full page notice by the: "The American Fact-Finding Committee" which is very critical of President Kennedy (see photos). This has become a rather well-know--and much desired--report in a period newspaper.
Also of curious interest--and only to be found in a Dallas newspaper--are two inconspicuous advertisements to be found on facing pages inside. One is for the 'Texas" movie theater, where Lee Harvey Oswald was arrested (trivia: he was watching the movie "War Is Hell": see photo) and the facing page has an advertisement for the "Carousel", the night club owned & operated by Jack Ruby (see).
Present are sections 1 and 3 of a 4 section newspaper. In very nice condition with minimal wear at the central fold & a very small piece from the blank right margin of the front leaf  not touching any text.