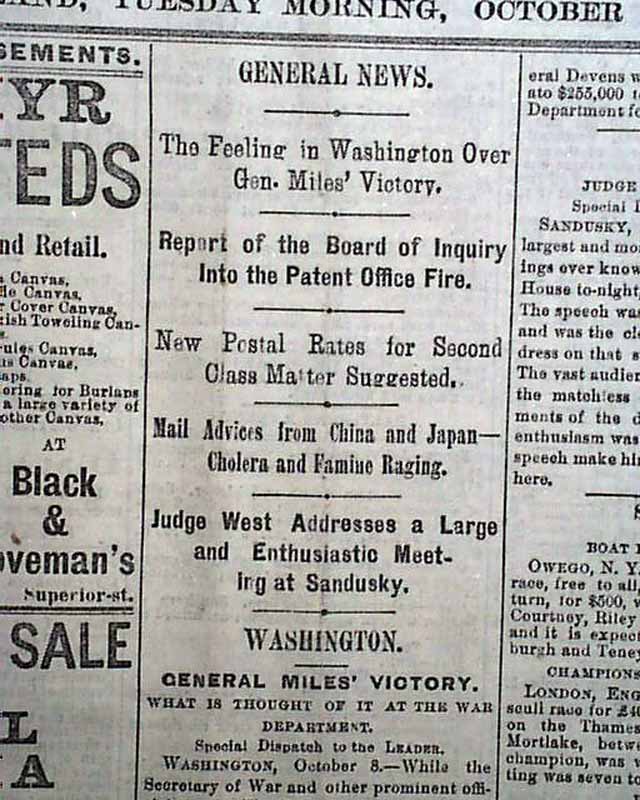 
THE CLEVELAND LEADER, Cleveland, Ohio, November 9, 1877  The front page of the issue has a one column heading: "General News"; "The Feeling in Washington Over Gen. Miles' Victory"; and more. (See photos for text on the decision of the U.S. military to send Chief Joseph and his followers to Fort Leavenworth in Kansas).
Other news of the day throughout including various advertisements. This is complete in 8 pages and is in good condition.

wikipedia notes: Chief Joseph's fame did him little good. By the time Joseph surrendered more than 200 of his followers had died. His plight, however, did not end. Although he had negotiated a safe return home for his people, General William Sherman forced Chief Joseph and about four hundred followers to be taken on unheated rail cars to Fort Leavenworth in eastern Kansas to be held in a prisoner-of-war campsite for eight months. Toward the end of the following summer the surviving Nez Perce were taken by rail to a reservation in the Indian Territory (now Oklahoma) for ten years. Many of them died of epidemic diseases while there. Finally they were returned to a reservation around Kooskia, Idaho.

A periodical for spiritualists in 188...