Home > Back to Search Results > Two of the best Kennedy assassination issues to be had....
Click image to enlarge 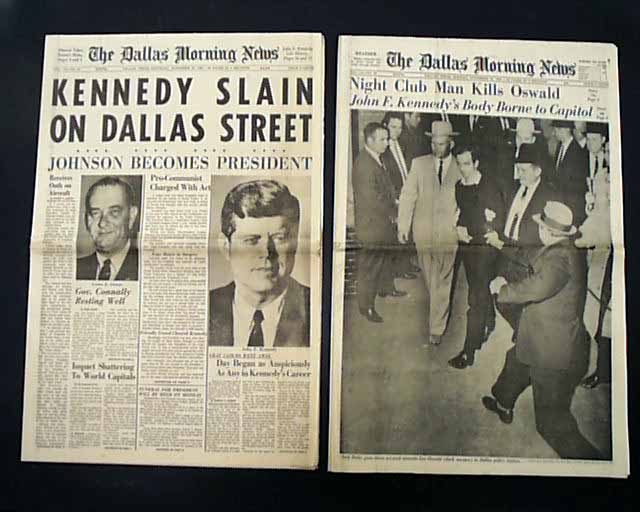 Two of the best Kennedy assassination issues to be had....


(2) Here is a terrific pair of issues Nov. 23 & 25, 1963) on the assassination of John F. Kennedy from the city where it happened. Both issues are THE DALLAS MORNING NEWS from Texas.

Note: While we do offer each of these issues as stand-alone items, purchasing them as a set will enable you to take advantage of a discounted price.

You get the November 23, 1963 edition with a first report on John F. Kennedy's assassination, from the city where it happened. Two line bold banner headline reads: "KENNEDY SLAIN ON DALLAS STREET" with subhead: "Johnson Becomes President", plus a rather large photo of "John F. Kennedy" and a smaller photo of Lyndon Johnson. Lots of related news and photos inside as well.
Of curious interest--and only to be found in a Dallas newspaper--are two inconspicuous advertisements to be found on facing pages inside. One is for the 'Texas" movie theater, where Lee Harvey Oswald was arrested (trivia: he was watching the movie "War Is Hell": see photo) and the facing page has an advertisement for the "Carousel", the night club owned & operated by Jack Ruby (see). Also of interest is the inconspicuous listing under "Deaths & Funerals" column announcing the death of the President: "KENNEDY - President John F., beloved husband of Jacqueline Kennedy; parents Mr. & Mrs. Joseph Kennedy; brothers Robert & Ted Kennedy; sisters Mrs. Peter Lawford, Mrs. Robert Shriber. Remains forward to Washington D.C." A curious obituary notice of a President of the United States. A related & notable entry is for "TIPPIT, J.D...." the policeman shot by Oswald shortly after the Kennedy assassination. In fact it was for Tippit's murder that Oswald was originally arrested. shortly thereafter they discovered Oswald's connection to Kennedy's assassination. A link to a History's Newsstand blog post which contains a photo of the obituary and a more detailed description is: Kennedy Obituary.
Complete in 50 pages in very nice condition.

You also get the November 25, 1963 edition which is a terrific issue, as the entire front page--save for the banner headline: "Night Club Man Kills Oswald -- John F. Kennedy's Body Borne to Capitol" is taken up with a huge photo showing Jack Ruby thrusting his pistol forward in the direction of Oswald and others, a split second before Oswald was shot.
There are many more related photos and headlines inside this 48 page issue. A great issue for display, and great to have from the city where it happened.

If ordering folders or portfolios, please consider getting two as both issues will not fit into one.