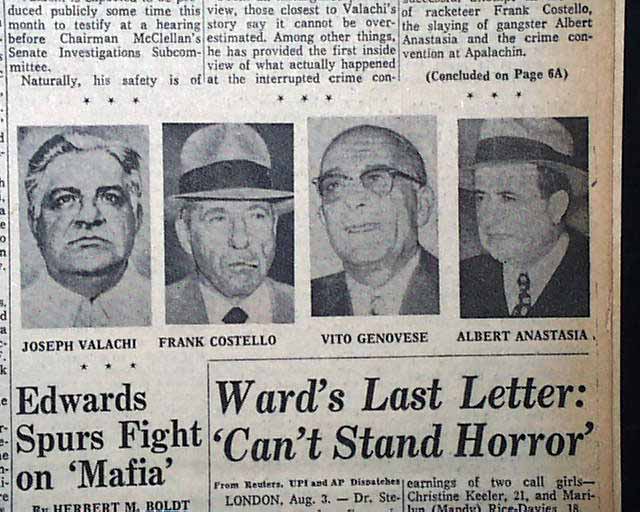 Joseph Valachi spills on the mafia...


THE DETROIT NEWS, Detroit, Michigan, August 4, 1963 The bold headlines are "Top Mobster Tells How Gang Runs Cities' Crime" with subhead "Hierarchy of Hoodlums Outlined - Detroit Named On Racket Hub". "For the first time in the federal war on organized crime, a figure once fairly high in the mob hierarchy is telling all he knows about crime in America... The very existence of such an informant, Joseph Valachi,... is spilling to federal agents, has been shrouded in secrecy until now... he has added new names and a flood of details on unsolved murders and mysterious disappearances... he as given the organization a name... 'Cosa Nostra' -- Our Thing...".  There is much more coverage in this report and also small photos of Joseph Valachi, Frank Costello, Vito Genovese and Albert Anastasia.
Also on the front page is "Henry Ford II and Wife Agree to Live Apart" which includes a large photo of them and "Test Tube Baby Is Ruled Illegitimate in N.Y. Suit".
Other news, sports and advertisements of the day are within.
This is complete in 102 pages with several binding holes along the left spine. There are several pages which have had non-archival mends, a library stamp in the masthead area, otherwise is in nice condition.