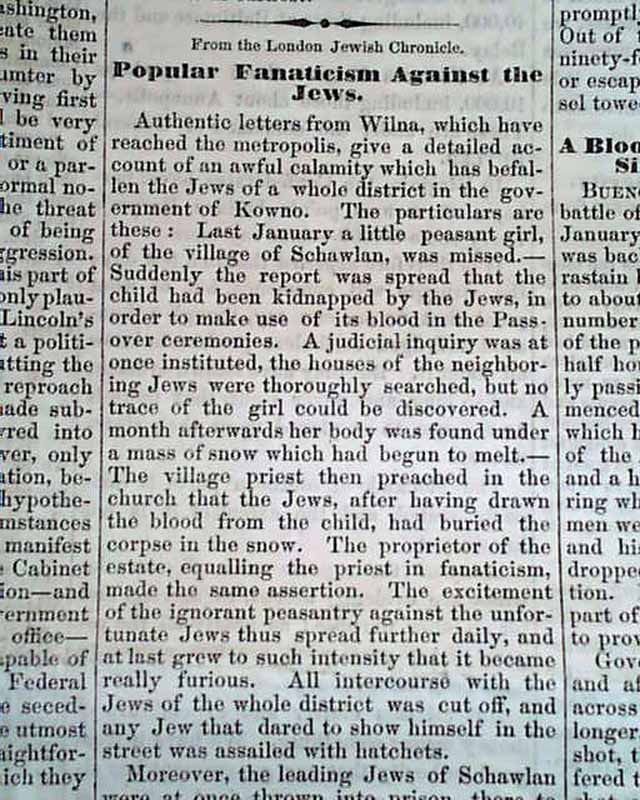 
THE CRISIS, Columbus, Ohio, May 23, 1861  Among the front page reports are: 'Very Disgraceful Treatment of the Volunteers" "Letter from Gen. Frost" "Interesting Letter from Mr. Vallandigham" "Relief for Volunteers". Among the items inside include: 'Terrible Times in Ward Townsbip! Exodus of Negroes!" "...Letter from Gen. Harney" "Interesting Correspondence--Repressing Slave Insurrections" "Popular Fanaticism Against the Jews' 'Feeling On The Battle Field" "Extra Session of the Congress of the Confederate States" "Explanation of the Attack on Fort Sumter" "Kentucky
Assumes a Neutral Position--Proclamation of the Governor of Kentucky" "War Literally, Sentimentally and Philosophically Considered" and much more.
Described as "The Hottest Rebel Sheet to be found in the North or the South", this newspaper opposed the war and attracted the hatred of the Republicans and the Lincoln administration. It insisted that slavery could not be prohibited by law. So obnoxious was this paper to Unionists that it was denied circulation in some cities. In 1863 the press was raided by a hateful mob.
Eight  pages, never-trimmed margins, tiny binding holes at the blank spine, very nice condition.