Home > Back to Search Results > The Bennington Mob... Gage coming to America...
Click image to enlarge 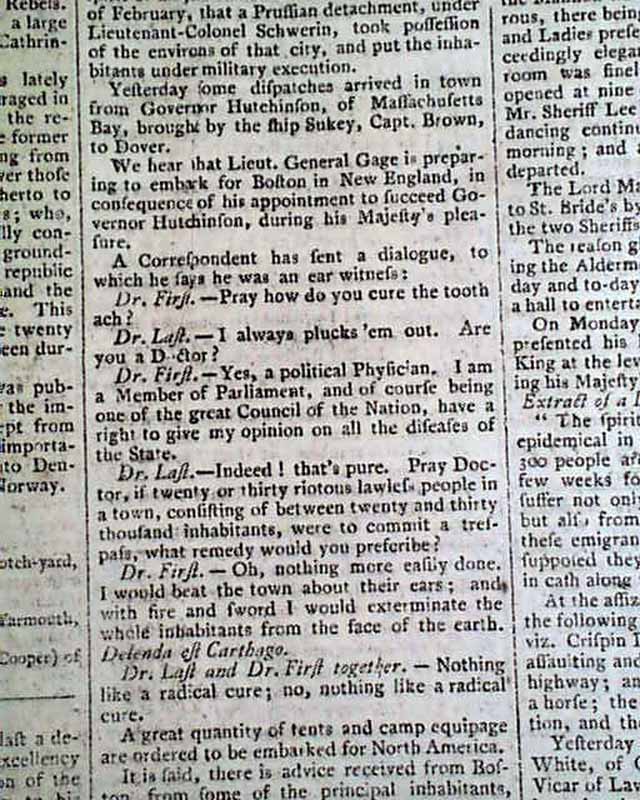 
THE LONDON CHRONICLE, England, April 7, 1774  Page 2 has an item noting: "Yesterday some dispatches arrived in town from Governor Hutchinson, of Massachusetts Bay...We hear that Lieut. General Gage is preparing to embark for Boston in New England in consequence of his appointment to succeed Governor Hutchinson during his Majesty's pleasure." A fateful decision that would set the stage for the coming Revolutionary War.
A full column is taken up with items under the heading: "America" and includes some political items from New Hampshire (see) There is also a letter from New York which discusses: "...a petition of the sundry inhabitants of the county of Charlotte & the northern district of the county of Albany complaining of many acts of outrage, cruelty, and oppression, committed against their persons & property by the Bennington mob..." with more (see).
Eight pages, 8 1/2 by 11 1/4 inches, full red ink tax stamp on page 4, nice condition.