Home > Back to Search Results > Colonists against the Stamp Act are warned of consequences.... Stamp distributor is forced to resign....
Click image to enlarge 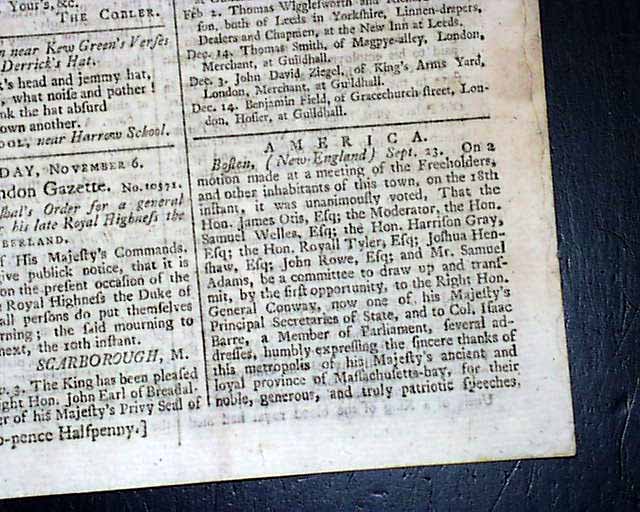 Colonists against the Stamp Act are warned of consequences.... Stamp distributor is forced to resign....

The front page has a report from Boston appointing a committee to be comprised of James Otis & Sam Adams, among others, to offer thanks for "...his Majesty's...noble, generous & truly patriotic speeches...in favour of the Colonies, their rights & privileges...".
But certainly the prime feature of this issue is the historic speech of Governor Bernard to the Massachusetts Assembly warning them of the consequences if the Stamp Act is ignored. The address begins: "I have called you together at this unusual time in pursuance of the unanimous advice of a very full council that you may take into consideration the present state of the province & determine what is to be done at this difficult & dangerous conjuncture. I need not recount to you the violences which have been committed in this town, nor the declarations which have been made & shall subsist that the act of parliament for granting stamp duties in the British colonies shall not be executed within this province..." and much more. Further on is: "...By this Act all papers which are not duly stamped are to be null and void; and all persons who shall sign, engross, or write any such papers will forfeit for each fact, ten pounds. If therefore stamps are not to be used, all public offices must be shut up..." and more.
Following this is a nice letter from Hartford noting in part: "...a large company of able bodied men...informed those who were willing to join them, that they were on their way to New Haven to demand of the stamp officer of this colony to resign his office..." with more including the confrontation with Mr. Ingersoll, who was convinced to resign his post, and then followed by Ingersoll's letter noting: "I do hereby promise that I will never receive any stamped papers...in consequence of an act lately passed in the parliament of Great Britain, nor officiate in any manner as stamp master or distributor of stamps..." with more.
Eight pages, 8 1/4 by 11 1/4 inches, very nice condition.