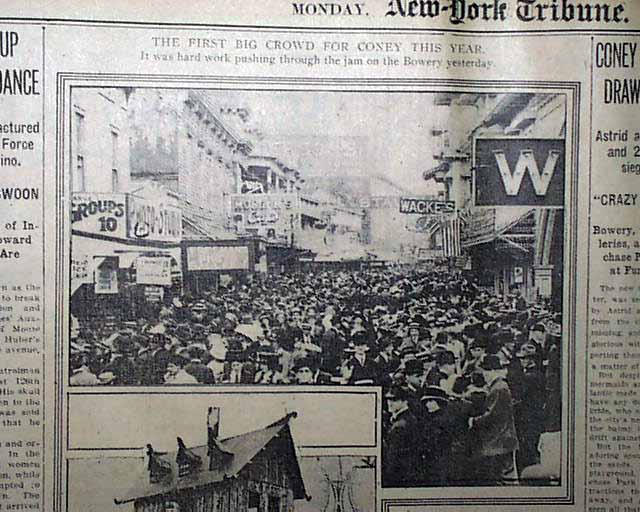 
NEW YORK TRIBUNE, May 19, 1913 The front page of the issue has a one-column headline "SAYS SLAVE TRUST EARNS MILLIONS" with subheads "Rockefeller Report Reveals Astounding Conditions Throughout the Borough of Manhattan"; "Traffic Not 'Economic'"; "Denounce Dance Halls and Makes Charge that Real Estate Agents Are Leagued with Procurers in 'Clearing House' Deals". This is dealing with the trafficking of young girls into the white slave market.
Page 8 reports "Walter Johnson Wins His Tenth Straight" with subhead "Senators Climb a Notch After Beating the Tigers in a Game of Thrills". Johnson won 36 games in 1913, 40% of the team's total wins in the season. Also during April and May, he pitched 55.2 consecutive scoreless innings, still the American League record and the third-longest streak in history. This would be the year that Johnson received the MVP award.
The back page has "Coney Island's Lure Draws Merry Throng"; "Astrid and Helga from Bronx and 299,998 Others Besiege Home of Frolic" as "the new Coney Island, bigger and better, was seen in all its glory...". There are two photos included.
Also on the back page is "Standard Oil Workers Move for Shorter Day" with subheads "Brotherhood of Stationary Firemen and A. F. of L. Start Fight on 'Inhuman' Conditions"; "Many 24-hour Shifts" and "Men Employed in Furnaces and Stills Are Afraid of Their Jobs, Labor Leaders Say -- Campaign Planned".
There is also an advertisement for the Lusitania.
This is complete in 14 pages with a slightly irregular left spine, some small edge tears, lite browning, otherwise in good condition. Should be handled with care.