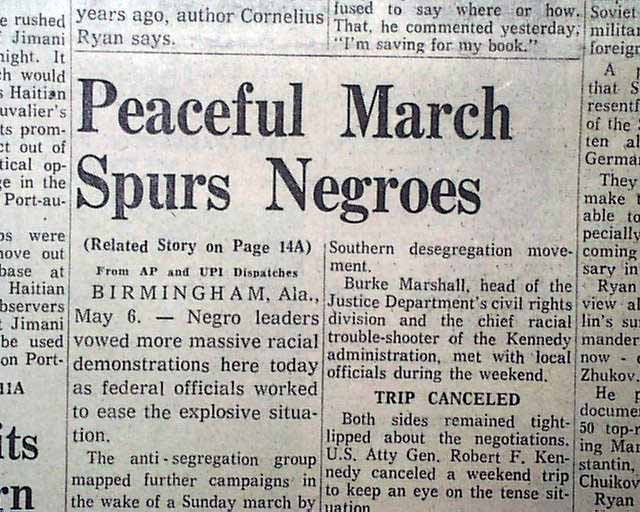 
THE DETROIT NEWS, Detroit, Michigan, May 6, 1963 The front page of this issue has a two line, two column headline "Peaceful March Spurs Negroes" which was reporting on this "Children's Crusade" which began on May 2nd. After over 1,400 arrest in the previous four days, this day (Sunday) was a day for singing, chanting and praying, with the only arrest being of a couple inside the church -- as no white people would be allowed in the church.
Also on the front page is a large photo of Adolf Hitler and Eva Braun with an article "Found Hitler's Body in '45. Reds Say in War 'Secrets'". "The Russians found and identified Adolf Hitler's charred body in the burned ruins of the Fuehrer's Berlin bunker 18 years ago, author Cornelius Ryan says...The Russians disposed of the body, Ryan said, but he refused to say where or how. That he commented yesterday, 'I'm saving for my book.'..."
Additional articles, sports and advertisements of the day are within.
This is complete in 40 pages, several small binding holes along the left spine which does affect some text but not the described articles, has library stamps in the masthead area, otherwise is in good condition.

Source (Wikipedia): The Children's Crusade was the name bestowed upon a march by hundreds of school students in Birmingham, Alabama, on May 2, May 3, May 4, and May 5, 1963, during the American Civil Rights Movement's Birmingham Campaign. Initiated and organized by Rev. James Bevel, the purpose of the march was to walk downtown to talk to the mayor about segregation in their city. Many children left their schools in order to be arrested, set free, and then to get arrested again the next day. The marches were stopped due to the head of police "Bull Connor" who brought fire hoses to ward off the children and set police dogs after the children.

Malcolm X was opposed to the event because he thought it might expose the children to violence. He said, "Real men don't put their children on the firing line.”

A pivotal civil rights campaign was fought in Birmingham, the most segregated city in the US. Fire hoses and dogs were used to prevent them from meeting the Mayor. The students remained non violent. This is a cause of the 1964 Civil Right Act.