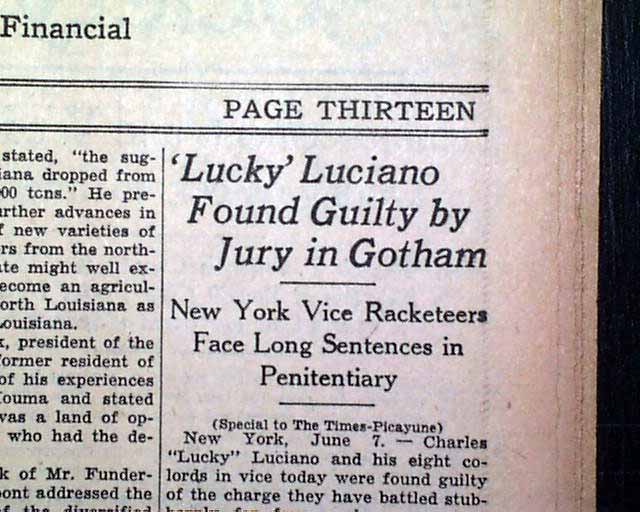 Page 13 has a one column heading:

and more. (see) 1st report coverage on the guilty verdict for Charles "Lucky' Luciano. He would spend the next 9 years in prison before being released. Lucky Luciano ranks as the #1 successful gangster of all-time.

Other news, sports and advertisements of the day. Complete in 24 pages, minor margin wear, otherwise good.

wikipedia notes: Lucky Luciano's reign was relatively short-lived. Special prosecutor Thomas E. Dewey, a future Republican presidential candidate (Later Luciano himself affirmed that the Commission had done everything they could in order for Dewey to become President in exchange for Luciano's return to America), singled out Luciano as an organized crime ringleader and targeted him, along with others. Luciano had previously voted against Dutch Schultz's proposal to assassinate Dewey after Schultz became the repeated target of Dewey's investigations. In a raid by Dewey of 80 New York City brothels, hundreds of arrested prostitutes agreed to turn state's evidence in exchange for not receiving prison time. Three of them implicated Luciano as the ringleader, who made collections, although David "Little Davey" Betillo was in charge of the prostitution ring in New York, and any money that Luciano received was from Betillo. But Dewey had also managed to persuade the staff at The Waldorf-Astoria Hotel to lie and say that Luciano's gangster friends had often come to his room. It is believed by almost all mob experts that Dewey framed Luciano, since Mafia did not bother with prostitution, and also Luciano meeting with hookers to collect money seemed a bit absurd,considering his position as boss.

Before he could get Luciano into court for trial, Luciano escaped to Hot Springs, Arkansas, the renowned gangster having established by famous gangster Owney Madden. An Arkansas judge remanded Luciano to a state prison for extradition, but a local paid-off police detective bailed Luciano out of jail after only four hours. Dewey then sent detectives to Arkansas to spirit Luciano back for trial.
Dewey's efforts succeeded in Luciano being convicted on charges as leader of one of the largest prostitution rings in American history in 1936 and sentenced to 30 to 50 years in prison, along with Dave Betillo and others. Dewey exposed Luciano for lying on the witness stand, through direct quizzing and records of telephone calls; Luciano also had no explanation for why his federal income tax records claimed he made only $22,000 a year, while it was obvious to onlookers that he was a wealthy man.