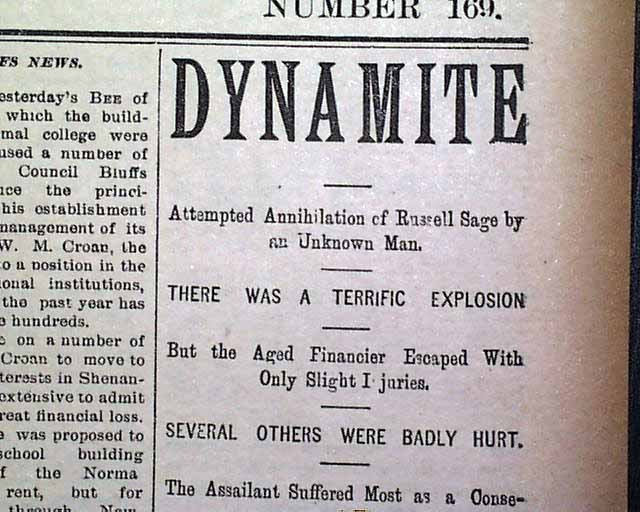 The front page has one column headlines that include: "DYNAMITE", "Attempted Annihilation of Russell Sage by an Unknown Man", "There Was A Terrific Explosion", "Several Others Were Badly Hurt", "He Demanded A Million Dollars" and more (see photos).

wikipedia notes: In 1891, Henry L. Norcross entered the office of Sage at 71 Broadway in Manhattan, claiming he needed to discuss railroad bonds. Norcorss gave Sage a letter demanding $1,200,000, which Sage declined to pay. Norcross was carrying a bag of dynamite, which exploded, killing Norcross, wounding Sage, and severely wounding William R. Laidlaw, Jr., a clerk for John Bloodgood and Co. who happened to be in the office. Afterward Laidlaw sued Sage, alleging that he had used him as a shield against Norcross. Disabled for life, Laidlaw aggressively pursued the lawsuits, winning $43,000 in damages after four trials, but a Court of Appeals reversed the award. Sage never paid any settlement and was publicly criticized as a miser, because of his great fortune.

Other news and advertisements of the day throughout. Complete in 8 pages, light browning, very minor margin wear, otherwise good condition. Should be handled with care.