Home > Back to Search Results > Harvey Firestone in 1938...
Click image to enlarge 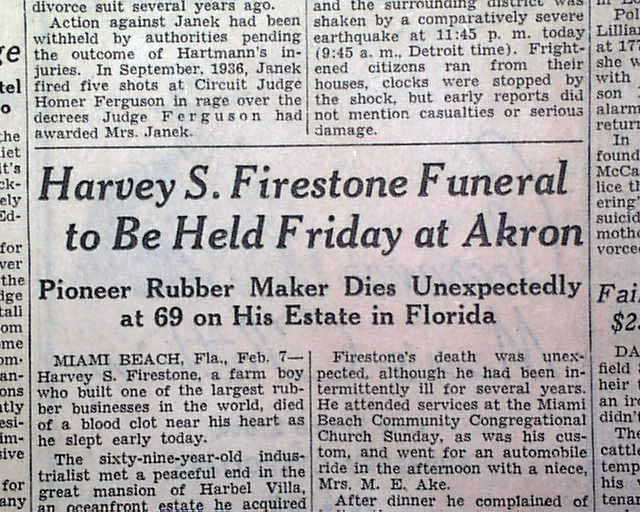 The front page has two column headings: "Harvey S. Firestone Funeral to Be Held Friday at Akron" "Pioneer Rubber Maker Dies Unexpectedly at 69 on His Estate in Florida"

Coverage continues inside with photo (see photos). This issue contains other news, sports and advertisements of the day. It is complete in 24 pages, has minor margin wear, but is otherwise in nice condition.

wikipedia notes: Firestone was born in his family's farm house in the small town of Columbiana, Ohio, the second of three children, to Benjamin Firestone, a farmer, and A. Catherine Flickinger. After graduating from Columbiana High School, Firestone worked for the Columbus Buggy Company in Columbus, Ohio before starting his own company in 1890, making rubber tires for carriages. In 1895 he married Isabelle Smith. They had five children: Harvey S. Firestone, Jr., Russell A. Firestone, Leonard Firestone, Raymond Firestone and Elizabeth Firestone. In 1904 Firestone joined Henry Ford to make rubber tires for the newly popular automobiles. The Ford-Firestone corporate marriage was later cemented when Henry's grandson William Clay Ford wed Martha Firestone, granddaughter of Harvey, who then became parents of current Ford Motor Company Chairman, William Clay Ford, Jr. The farmhouse where Firestone was born is now located in Greenfield Village (Dearborn, MI), a 90-acre historical site founded by Henry Ford.

Historical Background: Firestone was concerned both with the manufacture of tires and with securing supplies of rubber from trees: At one point, the company had a rubber plantation in Liberia that covered more than 4,000 square kilometers (1 million acres). During World War II the company was called on by the U.S. Government to make artillery shells, aluminum kegs for food transport and other rubberized military products. In 1938, Firestone died peacefully in his sleep at his vacation home in Miami Beach, Florida at age 69