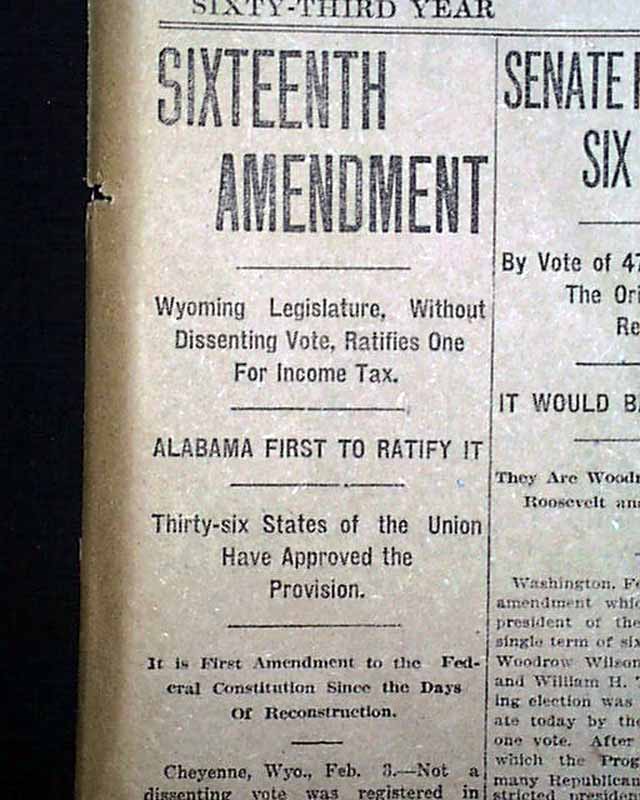 
DESERET SEMI-WEEKLY NEWS, Salt Lake City, Utah, February 3, 1913  The front page of this issue carries a column-wide headline "SIXTEENTH AMENDMENT" with subheads "Wyoming Legislature, Without Dissenting Vote, Ratifies One For Income Tax", Alabama First To Ratify It", "Thirty-six States of the Union Have Approved the Provision" and "It is First Amendment to the Federal Constitution Since the Days of Reconstruction". "Not a dissenting vote was registered in either house of the Wyoming legislature on the joint resolution ratifying the income tax amendment to the federal Constitution... An income tax is now one of the provision of the Constitution of the United Stats. Wyoming's ratification of the income tax amendment -- the sixteenth change in the Constitution and the first since the reconstruction - completed a list of the 36 states -- three-fourths of the Union, which have approved the provision...". This was reported the same day of the actual ratification.
Within the issue is an article "Life in Utah Fifty Years Ago" which includes an illustration of Clara Decker Young, Brigham Young's wife. This also has information on the battle between the soldiers from Camp Douglas and the Indians on Bear River.
Other news and advertisements are within.
This is complete in twelve pages which is evenly browned. Should be handled with some care.