Home > Back to Search Results > Blaming the Tea Act for the Revolutionary War...
Click image to enlarge 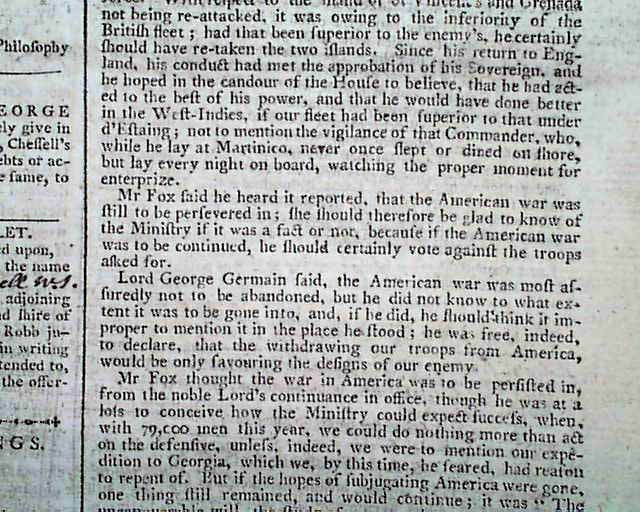 Blaming the Tea Act for the Revolutionary War...


EDINBURGH EVENING COURANT, Scotland, Dec. 15, 1779  Nearly half of the front page has "Parliamentary Proceedings" which includes some discussion of events in the war in America, including; "General Grant appealed to the candor of the House for a few words to clear himself from any blame in the loss of St. Vincent's. He sailed from New York with 5000 troops..." and: "...Lord George Germain said the American war was most assuredly not to be abandoned...to declare that the withdrawing our troops from America would be only favouring the designs of our enemy. Mr. Fox thought the war in America was to be persisted in..." (see).
Page 3 has some war content including: "...letters in town from Boston which make mention of an engagement near the port between an American & English privateer..." and "It is futile to say that the revolt of America was wholly owing to the mismanagement or oppression of the Ministry in passing the tea act, since it is well known by every man who has considered their temper...that independence was a subject they had in contemplation long before they could find a fair opportunity to divulge it..." with a bit more (see).
Four pages, folio size, some period notations in ads & their margins, very nice condition.