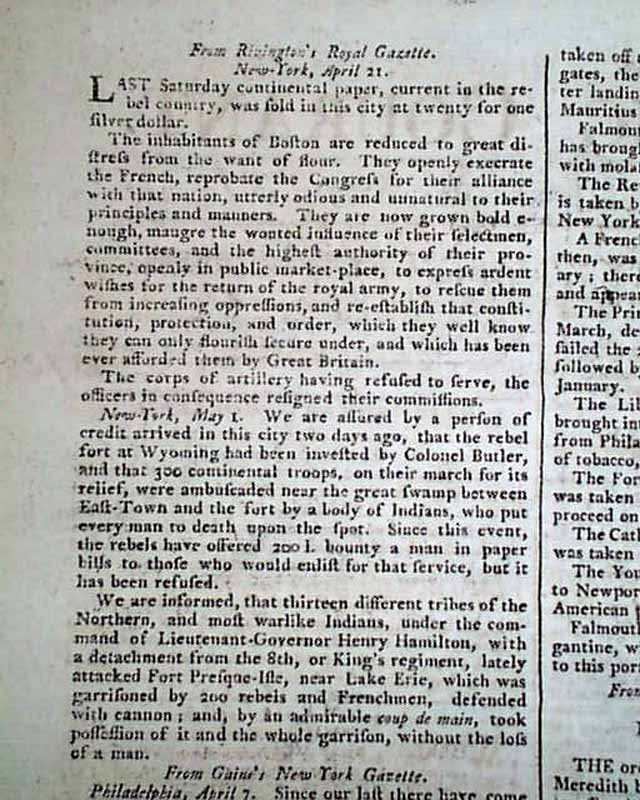 
EDINBURGH EVENING COURANT, Scotland, June 16, 1779  Nearly one-third of the front page has "Parliamentary Proceedings" which are focused on the actions of Sir William Howe in the Revolutionary War. A few bits include: "...With regard to Sir William Howe's reason for not marching the army up the east side of Hudson's River, the General said...there were  some small rivulets falling into that river...which might have retarded the march...The General having said that the Jerseys was much cleared of late..." and further on: "...I asked the General then if Sir William Howe had consulted him about the practicability of marching his army through the Jerseys...That the force sent out by General Britain was adequate to the objects of the war; What were those objects? To protect the good people of America against the bad ones...Were those objects attained? Certainly not...Did the General believe Sir William; Howe had, in any instance, neglected to do his duty, by omitting to bring the enemy to action...The General had only bee in the two actions on Long Island and on York Island..." and much more (see).
Most of page 2 is taken up with reports on the Revolutionary War with reports from Rivington's Royal Gazette in New York, and from Gaine's New York Gazette, in addition to various discussions in the "House of Commons" which includes talk of the war. A few bits include: "...inhabitants of Boston are reduced to great distress...openly execrate the French, reprobate the Congress for their alliance with that nation, utterly odious & unnatural to their principles & manners..." and: "...he had received authentic information that the number of provincials now in our service was equal to the army under General Washington; also that no less than 7000 American sailors are employed in privateers fitted out by the loyal Americans to cruize against the enemies of this country..." and  more.
Some content carries over to page 3 as well, which has a letter from Savannah, Georgia, which includes: "I suppose you have heard of a most compleat beating the rebels got at Brier Creek & the taking of the gallies in this river. the Indians having joined us..." and further in: "There is the greatest reason to hope for a reunion this summer with America, as the Americans cannot upon any account be reconciled to their new friends the French..." and more.
Four pages, folio size, some period notes in ads & margins, very nice condition.