Home > Back to Search Results > Pennsylvania is ripe for revolt...
Click image to enlarge 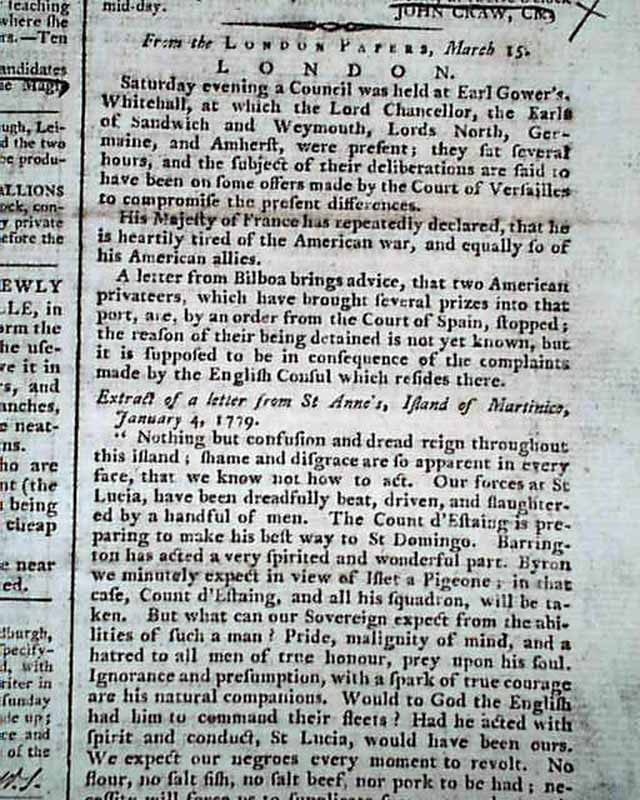 Pennsylvania is ripe for revolt...


EDINBURGH EVENING COURANT, Scotland, March 20, 1779  The front page has a brief yet interesting item: "...the subject of their deliberations are said to have been on some offers made by the  Court of Versailles to compromise the present differences. His Majesty of France has repeatedly declared that he is heartily tired of the American war & equally so of his American allies." Also on the ftpg: "...it is asserted that if Gen. Washington should attempt to march with 5000 men for Carolina, not 2000 will ever attend him to that province...that if he does march the members of the Congress...must attend him as the province of Pennsylvania is ripe for a revolt, being heartily tired of their oppressive rules." (see)
Page 3 has a letter from New  York includes: "...The inhabitants of Georgia are daily flocking into the King's standard. There is a great demand there for all manner of goods...This said that there are four regiments now under orders to embark, & it is supposed that they are to reinforce Colonel Campbell in Georgia...By...intercepted letters of the rebels...it is found that animosities run very high among some of their principal men & their paper money is so much depreciated that it will hardly pass for any thing, even amongst themselves."
Four pages, folio size, some period notations in ads & margins, very nice condition.