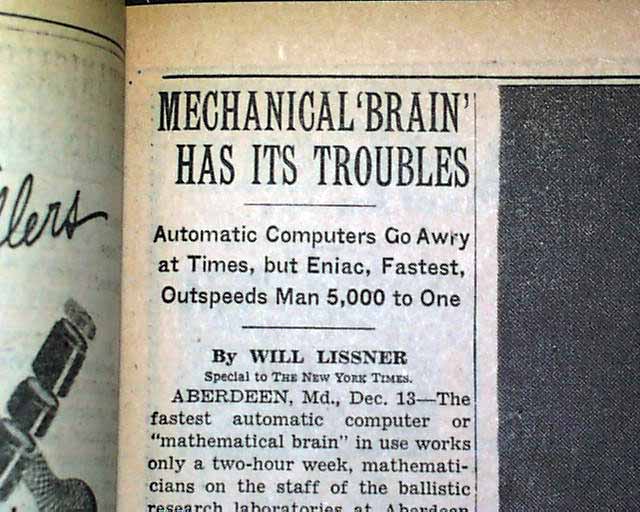 This 100+ page Sunday newspaper has one column headlines on page 49: "MECHANICAL 'BRAIN' HAS ITS TROUBLES" "Automatic Computers Go Awry at Times, but Eniac, Fastest, Outspeeds Man 5,000 to One"

See photos for text here. Other news, sport and advertisements of the day throughout. Close cut along right margin (unrelated to mentioned article), otherwise nice condition.

wikipedia notes: ENIAC, short for Electronic Numerical Integrator And Computer,[1] was the first general-purpose electronic computer. Precisely, it was the first high-speed, purely electronic, Turing-complete, digital computer capable of being reprogrammed to solve a full range of computing problems,[2] since earlier machines had been built with some of these properties. ENIAC was designed and built to calculate artillery firing tables for the U.S. Army's Ballistic Research Laboratory.

The contract was signed on June 5, 1943 and Project PX was constructed by the University of Pennsylvania's Moore School of Electrical Engineering from July, 1943. It was unveiled on February 14, 1946 at Penn, having cost almost $500,000. ENIAC was shut down on November 9, 1946 for a refurbishment and a memory upgrade, and was transferred to Aberdeen Proving Ground, Maryland in 1947. There, on July 29 of that year, it was turned on and would be in continuous operation until 11:45 p.m. on October 2, 1955.