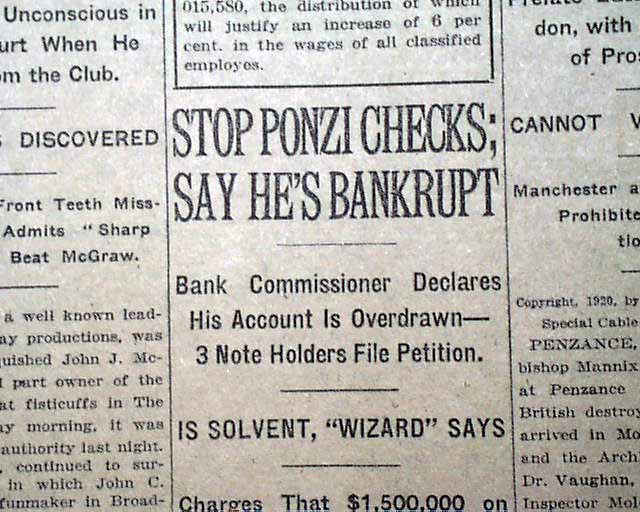 This issue contains other news, sports and advertisements of the day. It is complete in 32 pages and has light browning and minor margin wear. Otherwise it is in good condition.

wikipedia news: By this time Ponzi was seeking another deal to get him out of the golden trap he had built for himself, but time was running out. On July 26 the Post started a series of articles that asked hard questions about the operation of Ponzi's money machine. The Post contacted Clarence Barron, the financial analyst who published the Barron's financial paper, to examine Ponzi's scheme. Barron observed that though Ponzi was offering fantastic returns on investments, Ponzi himself wasn't investing with his own company.

Barron then noted that to cover the investments made with the Securities Exchange Company, 160,000,000 postal reply coupons would have to be in circulation. However, only about 27,000 coupons were actually circulating. The United States Post Office stated that postal reply coupons were not being bought in quantity at home or abroad. The gross profit margin in percent on buying and selling each IRC was colossal, but the overhead required to handle the purchase and redemption of these items, which were of extremely low cost and were sold individually, would have exceeded the gross profit.

The stories caused a panic run on the Securities Exchange Company. Ponzi paid out $2 million in three days to a wild crowd outside his office. He canvassed the crowd, passed out coffee and donuts, and cheerfully told them they had nothing to worry about. Many changed their minds and left their money with him.

In the short term, Ponzi had hired a publicity agent, James McMasters. However, McMasters quickly became suspicious of Ponzi's endless talk of postal reply coupons, as well as the ongoing investigation against him. He went to the Post, calling Ponzi a "financial idiot." The paper offered him five thousand dollars for his story, and ran a headline on August 2 declaring Ponzi hopelessly insolvent. On August 10 federal agents raided the Securities Exchange Company and shut it down. There was no large stock of postal reply coupons. The Hanover Trust Bank was shut down as well.

The Post continued their articles, with one revealing Ponzi's jail record and publishing his (smiling) Canadian mugshots. By August 13, Ponzi was under arrest, with a Federal indictment citing 86 counts of fraud. Ponzi's supporters were outraged at the officers who arrested him. 17,000 people had invested millions, maybe tens of millions, with Ponzi. Many who were ruined were so blinded by their faith in the man or their refusal to admit their foolishness that they still regarded him as a hero.