Home > Back to Search Results > Commenting on Washington's Proclamation...
Click image to enlarge 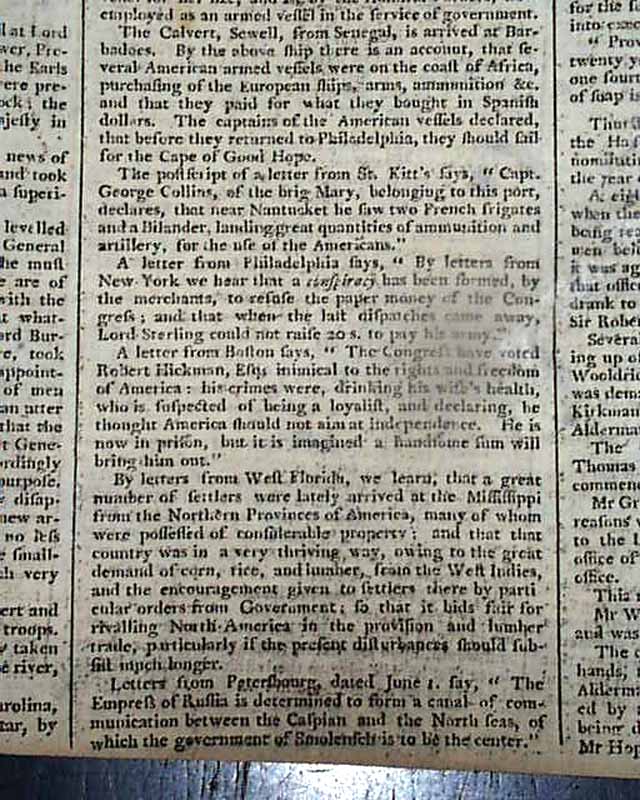 
EDINBURGH EVENING COURANT, Scotland, March 29, 1777  Page 2 has some Revolutionary War content including: "By a gentleman...from New York...informed...the first act of Mr. Washington's administration has proved rather an extraordinary one in consequence of his late proclamation as Lord Protector, one Mr. Brown wrote to him for leave to withdraw to New York; though such liberty had been proclaimed, it was not only refused, but the gentleman was seized and thrown into arms & is now confined in a dungeon in the Jerseys." Also: "...that the forces now to be sent to America will not exceed 6000 which are more than General Howe required..." (see).
Page 3 has an item noting: "...arrived from New York...that six battalions of rebel soldiers had laid down their arms & determined to serve no longer; that a council of war was called...was thought something would be resolved decisive as to the submission of America..." (see).
Four pages, folio size, period notations on ads & some margins, very nice condition.

Revolutionary War in the Caribbean...