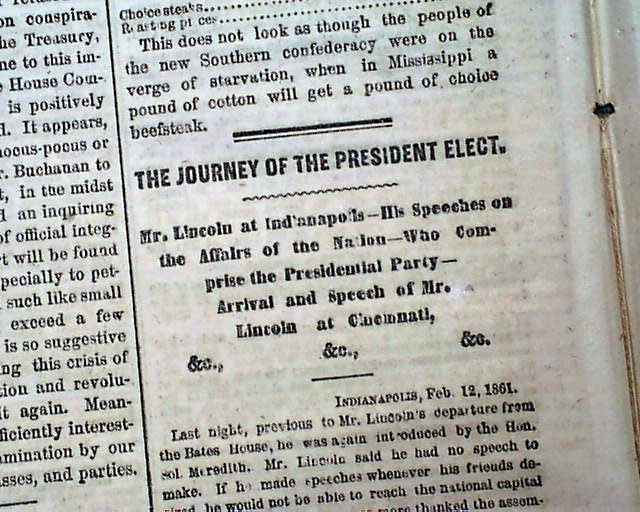 The front page reports the ominous events which would lead to the outbreak of the Civil War in less than two months with first column headlines including: "THE NATIONAL CRISIS", "The Deplorable Condition of the Government Finances", "Warlike Measures of the Republicans", "Proceedings of the Committee of the Peace Convention", "The Southern Congress", "The New Government Assumes Charge of the Question Relative to the Public Property" and more.
Perhaps the best content is found on page 4, with one column heads: "The Journey Of The President Elect" and "Mr. Lincoln at Indianapolis--His Speeches on the Affairs of the Nation--Who Comprise the Presidential Party--Arrival & Speech of Mr. Lincoln at Cincinnati". There are also many subheads in this lengthy report reading: "Arrival at Morris, Indiana", "Arrival of the Presidential Party at Cincinnati", "Another Speech by Mr. Lincoln", "Arrangements for Mr. Lincoln's Reception at Albany", "Arrangements at Trenton", "The Reception at Lawrenceburg", "The Reception of Mr. Lincoln in Baltimore" and "Important Speech of Mr. Lincoln at Indianapolis" (see photos).
Another curious item just after this lengthy Lincoln report is one headed: "Arrival of the California Pony Express".
Complete in 8 pages, light damp staining at the very top, generally in very nice condition.