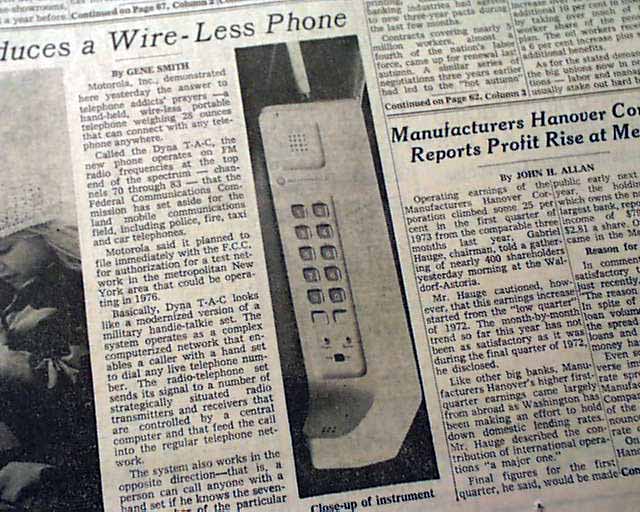 In much the same what that Alexander Graham Bell's historic first telephone call on March 10, 1876 gave birth to a cultural and business shift which changed the world, so to did the very first cellular telephone call. That call is reported in this newspaper.
As noted in Wikipedia, in 1973 Motorola installed a base station to handle the first public demonstration of a phone call over a cellular network. On April 3, 1973 the phone's inventory, Martin Cooper, took the cellular phone technology to New York to demonstrate it to reports & the public where a call was made while standing on Sixth Avenue new the New York Hilton hotel. The phone was a prototype "Dyna-Tac" and weighted about 2.5  pounds, although the Times articles mentions 28 ounces.

The article is somewhat inconspicuously located at the bottom of page 57 under the heading: "Motorola Introduces a Wire-Less Phone" with a photo of the phone & another of it being used (see). The article carries over to page 59. One curious item in the article notes: "...Mr. Cooper predicted that through use of advanced circuitry & new technologies the size of the hand sets could be reduced even further to the point where they might fit in a breast pocket..." (see).

Cooper's vision for a personal wireless handheld telephone was inspired by watching Captain Kirk  using his communicator on the television show Star Trek.

It is very likely this report was only reported in New York City papers making this a very rare, 1st report here.

Complete in 76 pages, light toning at the central fold on page 1 only, very nice condition. An extremely significant report of a an invention which would have consequences far beyond what could have been imaged in 1973.