Home > Back to Search Results > Critical of Boston failing to honor the Non-imporatation Agreement...
Click image to enlarge 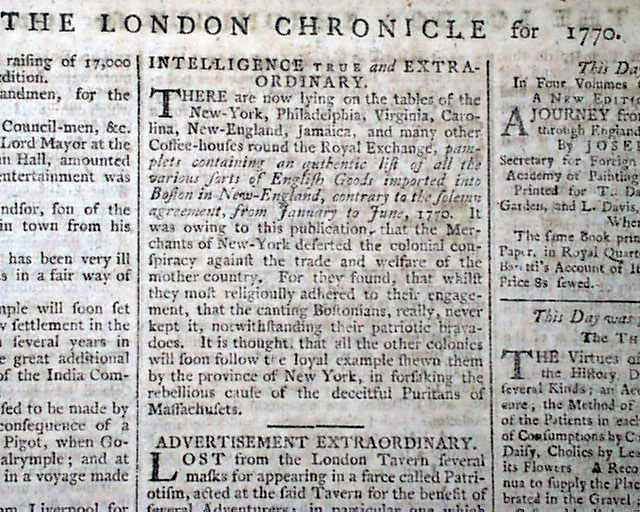 Critical of Boston failing to honor the Non-imporatation Agreement...

The top of page 3 has an item headed: "Intelligence True & Extraordinary" which is a critical report on the Bostonians failing to hold to the non-importation agreement, noting: "There are now lying on the tales of New York Philadelphia, Virginia, Carolina...pamphlets containing an authentic list of all ...English goods imported into Boston...contrary to the solemn agreement...the merchants of New York deserted the colonial conspiracy against the trade...found that whilst they most religiously adhered to their engagement, that the canting Bostonians really never kept it, notwithstanding their patriotic bravadoes...all the other colonies will soon follow the loyal example shewn them by the province of New York in forsaking the rebellious cause of the deceitful Puritans of Massachusetts." (see photos).
Near the back is an ad headed "American Lands" noting 35,000 acres in Albany County, New York (see photos).
Eight pages, 8 1/2 by 11 1/4 inches, very nice condition.