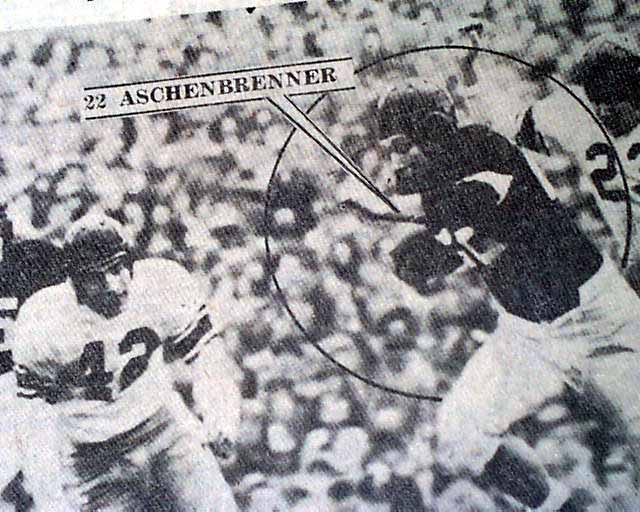 Within the sport's section (inside) is a nice banner headline: "Wildcats Rally to Defeat California, 20-14"

with subheads, stats and related photo (see photos). Also reports on the Orange, Cotton and Sugar Bowl games with more photos and stats.

Other news, sports and advertisements of the day. Complete in 50+ pages, some small binding holes along spine, otherwise nice.

wikipedia notes: The 1949 Rose Bowl was a college football bowl game. It was the 35th Rose Bowl Game, and the third since the Big Nine conference and PCC agreed to an exclusive agreement to match their conference champions. The Northwestern Wildcats defeated the California Golden Bears 20-14. Northwestern halfback Frank Aschenbrenner was named the Rose Bowl Player Of The Game (although the award was created in 1953 and selections were made retroactively).

The game was memorable largely because the Wildcats were underdogs going into the game but nevertheless pulled off an upset over a conference powerhouse. This Rose Bowl was the Wildcats' first berth even though it had only won a bid to the game because conference rules prevented two-time Big 9 champion Michigan from going in successive years. California had a perfect record going into the game and had averaged 28 points per game over the course of the season. Although neither team had faced each other before, Coach Waldorf had previously been the Wildcats coach between 1935 and 1946 before leaving for the Golden Bears. NU's Coach Voight was only 33 years old and had been named All-American under Waldorf 11 years earlier.