Home > On the effect of the Battle of Bunker's Hill...
Click image to enlarge 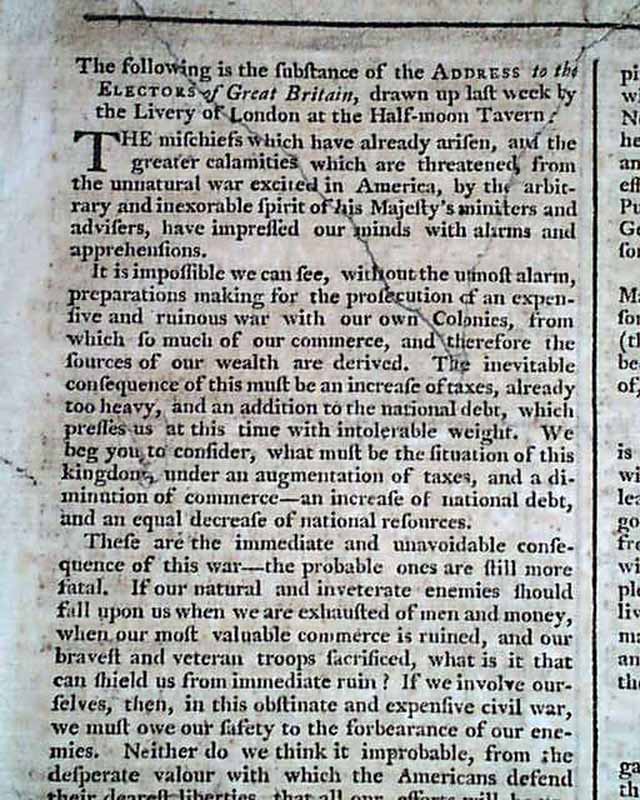 On the effect of the Battle of Bunker's Hill...

Close to two-thirds of the front page is taken up with news items relating to America, beginning with a very prophetic statement: "The mischiefs which have already arisen & the greater calamities which are threatened from the unnatural war excited in America...It is impossible we can see, without the utmost alarm, preparations making for the prosecution of an expensive & ruinous war with our own Colonies..." with more (see). Also: "...Neither do we think it improbable, from the desperate valour with which the Americans defend their dearest liberties..." and near the end: "...We lament the blood that has been already shed; we deplore the fate of those brave men..." and more.
The ftpg. also has under the heading "America" a letter from an officer at Boston beginning: "Bunker's Hill business of the 17th of June has convinced the Provincials so entirely of the irresistible intrepidity of our troops that they have attempted nothing of any moment since. They have formed a line of contravallation from Mustick River which runs by Bunker's Hill, round to Dorchester, about eight miles..." with more (see). This is followed by more concerning the loss of trade with America (see).
Four pages, folio size, an older archival mend to the front leaf causes no loss of readability, generally nice.