Home > Back to Search Results > In defence of Major Andre...
Click image to enlarge 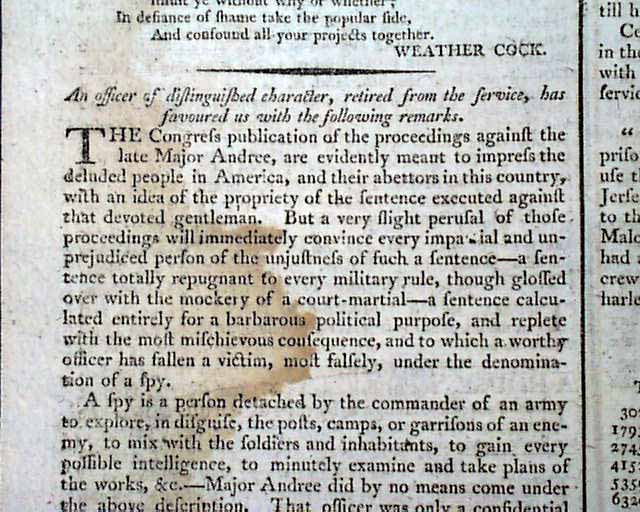 In defence of Major Andre...


THE EDINBURGH EVENING COURANT, Scotland, Dec. 25, 1780  Page 2 contains a lengthy and fascinating defense of Major Andre in the Benedict Arnold treason affair. Bits include: "The Congress publication of the proceedings against the late Major Andree are evidently meant to impress the deluded people in America & their abettors in this country with an idea of the propriety of the sentence executed against that devoted gentleman...A spy is a person detached...to explore, in disguise, the posts, camps, or garrisons of an enemy, to mix with the soldiers...to gain every possible intelligence...Major Andre did by no means come under the above description...The plan & mode fixed for the surrender was sketched out in Gen. Arnold's own hand writing...Major Andre went out in his regimentals; spies act otherwise...The plans & papers found in Major Andre's possession were those delivered & written by Gen. Arnold..." and much more (see).
Four pages, some light damp staining, partial red tax stamp on the ftpg., generally nice.