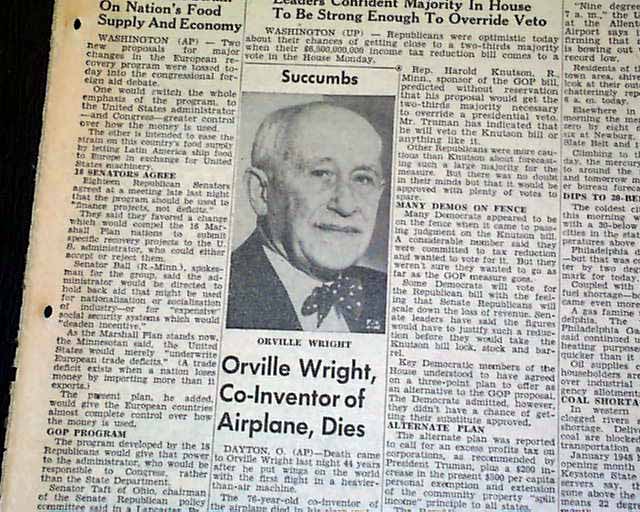 This 16 page newspaper has one column headlines on the front page: "Orville Wright, Co-Inventor of Airplane, Dies"

Also on the front is a four column headline that reads: "Gandhi's Body Cremated; Violence Flares In Bombay"

Other news, sports and advertisements of the day. Light browning with a few small binding holes along spine, otherwise nice.

wikipedia notes: On 30 January 1948, Gandhi was shot and killed while having his nightly public walk on the grounds of the Birla Bhavan (Birla House) in New Delhi. The assassin, Nathuram Godse, was a Hindu radical with links to the extremist Hindu Mahasabha, who held Gandhi responsible for weakening India by insisting upon a payment to Pakistan. Godse and his co-conspirator Narayan Apte were later tried and convicted; they were executed on 15 November 1949. Gandhi's memorial (or SamÄdhi) at RÄj GhÄt, New Delhi, bears the epigraph "HÄ Ram", which may be translated as "Oh God". These are widely believed to be Gandhi's last words after he was shot, though the veracity of this statement has been disputed.[23] Jawaharlal Nehru addressed the nation through radio:
“     Friends and comrades, the light has gone out of our lives, and there is darkness everywhere, and I do not quite know what to tell you or how to say it. Our beloved leader, Bapu as we called him, the father of the nation, is no more. Perhaps I am wrong to say that; nevertheless, we will not see him again, as we have seen him for these many years, we will not run to him for advice or seek solace from him, and that is a terrible blow, not only for me, but for millions and millions in this country.[24]     ”

Gandhi's ashes were poured into urns which were sent across India for memorial services. Most were immersed at the Sangam at Allahabad on 12 February 1948 but some were secreted away. In 1997, Tushar Gandhi immersed the contents of one urn, found in a bank vault and reclaimed through the courts, at the Sangam at Allahabad. On 30 January 2008 the contents of another urn were immersed at Girgaum Chowpatty by the family after a Dubai-based businessman had sent it to a Mumbai museum. Another urn has ended up in a palace of the Aga Khan in Pune (where he had been imprisoned from 1942 to 1944) and another in the Self-Realization Fellowship Lake Shrine in Los Angeles.[27] The family is aware that these enshrined ashes could be misused for political purposes but does not want to have them removed because it would entail breaking the shrines.

wikipedia also notes: The Wright brothers, Orville (August 19, 1871 – January 30, 1948) and Wilbur (April 16, 1867 – May 30, 1912), were two Americans who are generally credited[1][2][3] with inventing and building the world's first successful airplane and making the first controlled, powered and sustained heavier-than-air human flight, on 17 December 1903. They are also officially credited worldwide through the Fédération Aéronautique Internationale, the standard setting and record-keeping body for aeronautics and astronautics, as "the first sustained and controlled heavier-than-air powered flight". In the two years afterward, the brothers developed their flying machine into the first practical fixed-wing aircraft. Although not the first to build and fly experimental aircraft, the Wright brothers were the first to invent aircraft controls that made fixed wing flight possible.

The brothers' fundamental breakthrough was their invention of "three-axis control", which enabled the pilot to steer the aircraft effectively and to maintain its equilibrium.[4] This method became standard and remains standard on fixed wing aircraft of all kinds.[5][6] From the beginning of their aeronautical work, the Wright brothers focused on unlocking the secrets of control to conquer "the flying problem", rather than developing more powerful engines as some other experimenters did. Their careful wind tunnel tests produced better aeronautical data than any before, enabling them to design and build wings and propellers more effective than any before.[7][8] Their U.S. patent 821,393 claims the invention of a system of aerodynamic control that manipulates a flying machine's surfaces.[9]

They gained the mechanical skills essential for their success by working for years in their shop with printing presses, bicycles, motors, and other machinery. Their work with bicycles in particular influenced their belief that an unstable vehicle like a flying machine could be controlled and balanced with practice.[10] From 1900 until their first powered flights in late 1903, they conducted extensive glider tests that also developed their skills as pilots. Their bicycle shop employee Charlie Taylor became an important part of the team, building their first aircraft engine in close collaboration with the brothers.

The Wright brothers' status as inventors of the airplane has been subject to counter-claims by various parties. Much controversy persists over the many competing claims of early aviators.