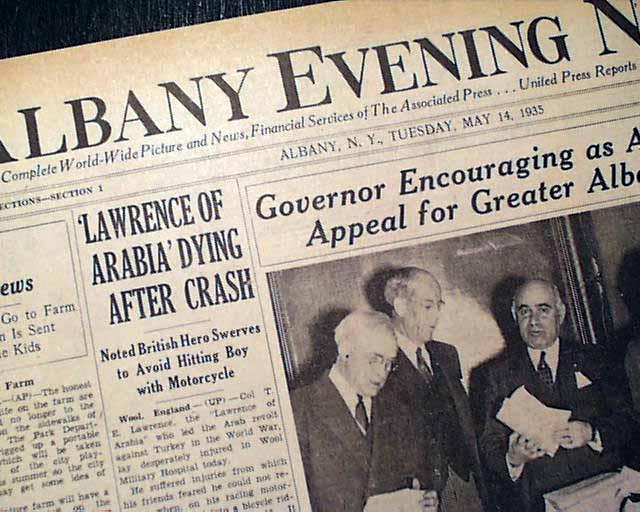 This 22 page newspaper has one column headlines on the front page: "'LAWRENCE OF ARABIA' DYING AFTER CRASH"
"Noted British Hero Swerves to Avoid Hitting Boy with Motorcycle"

1st report coverage of the motorcycle accident that would be fatal to Thomas Edward Lawrence, better known as Lawrence of Arabia.

Other news, sports and advertisements of the day throughout. Light browning, a little spine wear, otherwise nice.

wikipedia notes: A few weeks after leaving the service, aged 46, he was fatally injured in a motorcycle accident in Dorset, close to his cottage, Clouds Hill, near Wareham (now run by the National Trust and open to the public). The accident occurred because of a dip in the road that obstructed his view of two boys on their bicycles; he swerved to avoid them, lost control and was thrown over the handlebars of his motorcycle. He died six days later.

Some sources mistakenly claim that Lawrence was buried in St Paul's Cathedral; in reality, only a bust of him was placed in the crypt. His final resting place is the Dorset village of Moreton. Moreton Estate, which borders Bovington Camp, was owned by family cousins, the Frampton family. Lawrence had rented and subsequently purchased Clouds Hill from the Framptons. He had been a frequent visitor to their home, Okers Wood House, and had for many years corresponded with Louisa Frampton.

On Lawrence's death, his mother wrote to the Framptons asking whether there was space for him in their family plot at Moreton Church. At his funeral there, attendees included Winston and Clementine Churchill and Lawrence's youngest brother, Arnold (who demonstrated the Lawrencian dry humour in speaking with reporters), and T.E. Lawrence's coffin was transported on the Frampton estate bier.