Home > Back to Search Results > 1st battle of the Stronghold... Modoc War....
Click image to enlarge 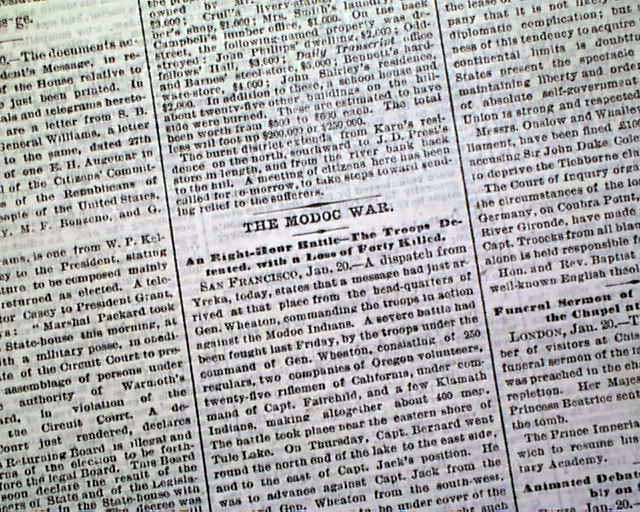 The front page has one column headings: "The Modoc War" "An Eight-Hour Battle--The Troops Defeated with a Loss of Forty Killed" which is a 1st report on the first battle of the Stronghold during the Modoc War.

Other news of the day. Complete in 8 pages, nice condition.

wikipedia notes: On the morning of January 17, 1873, troops advanced on the Stronghold. Hindered by fog, the soldiers never saw any Modoc. Occupying excellent positions, the Modoc repulsed troops advancing from the west and east. A general retreat of troops was ordered at the end of the day. In the attack, the U.S. Army lost 35 men killed, and 5 officers and 20 enlisted men wounded. Captain Jack's band included approximately 150 Modoc, including women and children. Of that number, there were only 52 warriors. The Modoc suffered no casualties in the fighting, as they had the advantage of terrain and local knowledge over the militia.

Incorporating the city of Pittsfield,...