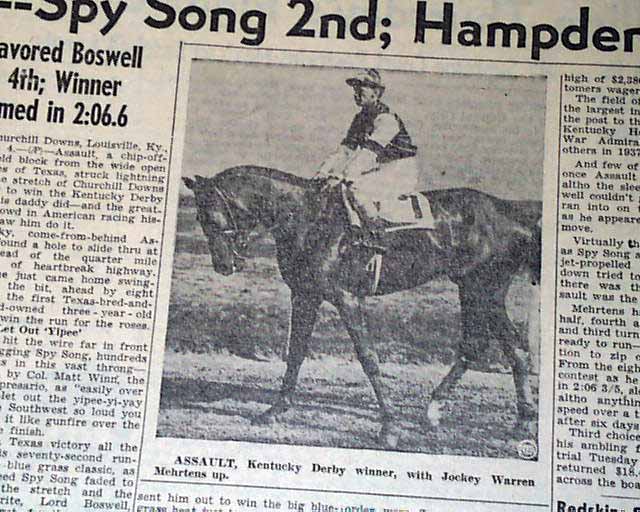 This 32 page newspaper has a four column headline on page 15A: "Assault Captures Rich Derby--Spy Song 2nd; Hampden 3rd" with subhead and photo. This was the 1st of 3 historic wins for the famed horse for the triple crown.

Other news, sports and various advertisements of the day throughout. Minor margin wear, a few small binding holes along spine, otherwise good condition.

wikipedia notes: Under Max Hirsch's training, Assault made his racing debut as a two-year-old in 1945, unceremoniously finishing 12th. He wound up with a record of two wins in nine starts that year, surprisingly capturing the Flash Stakes in a four-way photo finish, but nothing to be overly impressed with. Early in his three-year-old season, he began turning things around. He was victorious in the prestigious Wood Memorial, but an off-the-board finish in the Derby Trial made him somewhat of an outside shot in the Kentucky Derby. With jockey Warren Mehrtens aboard, he blew past rivals to take the first jewel of the Triple Crown by eight lengths, the longest margin of victory to date. Rejuvenated by his impressive win, Assault was made the favorite for the Preakness Stakes a week later. Aggravated by traffic early in the race, Mehrtens decided to push Assault earlier than usual. He was four lengths in front with 1/8 of a mile to go, and quickly running out of energy. Assault just barely sustained a neck victory over closer Lord Boswell.

The crowds saw this as a stamina issue, and made Lord Boswell the favorite in the 1½-mile Belmont Stakes. After stumbling at the start, Assault trailed the field throughout much of the race. Mehrtens allowed him to take his time and find his bearings instead of rushing him. In the final 200 yards, Assault exploded past the leaders to win the Belmont by three lengths. He was the seventh Triple Crown winner ever, and the third during the 1940s.