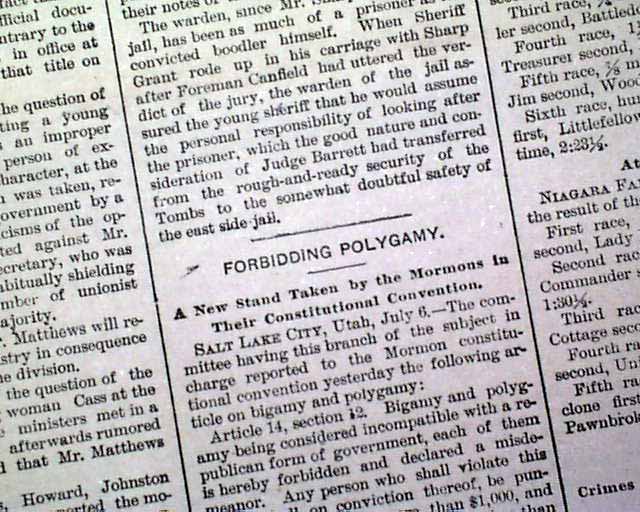 Polygamy by the Mormons was not officially outlawed until 1890, which was a condition required before statehood was granted which happened in 1896, however a front page report in this issue notes the efforts in Utah by Mormon leaders which lead up to this historic decision. "Forbidding Polygamy" and the subhead: "A New Stand Taken by the Mormons in Their Constitutional Convention" has a Salt Lake City, July 6 dateline, and notes in part: "The committee having this brand of the subject in charge reported to the Mormon constitutional convention...the following article on bigamy & polygamy: Article 14, section 12. Bigamy & polygamy being considered incompatible with a republican form of government, each of them is hereby forbidden and declared a misdemeanor. Any person who shall violate this section shall, on conviction thereof, be punished by a fine of not more than $1,000 & by imprisonment for a term of not less than six months..." (see photos).
Complete in 8 pages, very nice condition.