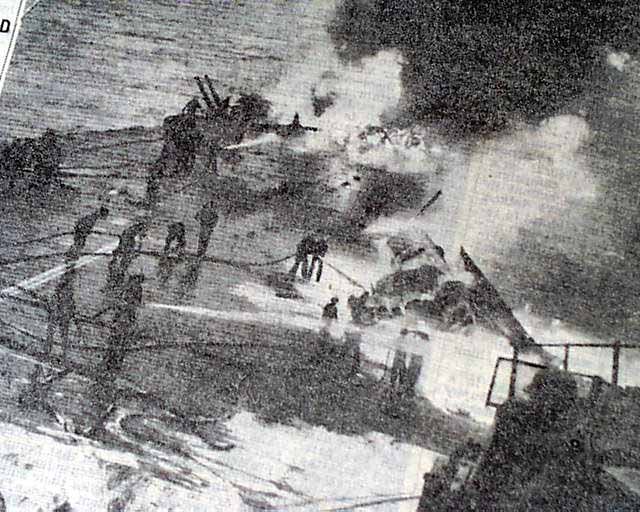 Reporting on many disasters such as this were kept from the public, sometimes for many months, until the family members of the killed were all notified, giving the reason for these late reports. Still a first report.

Other news, sports and various advertisements of the day throughout with much on World War II. Rag edition in great condition.

wikipedia notes: The three task groups of TF 38 completed their transit during the night of 20 January and 21 January. The next morning, their planes hit airfields on Formosa, in the Pescadores, and at Sakishima Gunto. The good flying weather brought mixed blessings. While it allowed American flight operations to continue through the day, it also allowed for Japanese kamikaze operations.
Ticonderoga listing after kamikaze attacks, 21 January 1945.

Just after noon, a single-engine Japanese plane scored a hit on Langley with a glide-bombing attack. Seconds later, a kamikaze swooped out of the clouds and plunged toward Ticonderoga. He crashed through her flight deck abreast of the No. 2 5 in (130 mm) mount, and his bomb exploded just above her hangar deck. Several planes stowed nearby erupted into flames. Death and destruction abounded, but the ship's company fought valiantly to save the threatened carrier. Captain Kiefer conned his ship smartly. First, he changed course to keep the wind from fanning the blaze. Then, he ordered magazines and other compartments flooded to prevent further explosions and to correct a 10° starboard list. Finally, he instructed the damage control party to continue flooding compartments on Ticonderoga's port side. That operation induced a 10° port list which neatly dumped the fire overboard. Firefighters and plane handlers completed the job by dousing the flames and jettisoning burning aircraft.

The other kamikazes then pounced on the carrier. Her antiaircraft gunners struck back with ferocity and quickly shot three down into the sea. A fourth plane slipped through her barrage and smashed into the carrier's starboard side near the island. His bomb set more planes on fire, riddled her flight deck, and injured or killed another 100 sailors, with Captain Kiefer one of the wounded. Yet Ticonderoga's crew refused to submit. Spared further attacks, they brought her fires completely under control not long after 1400; and Ticonderoga retired.