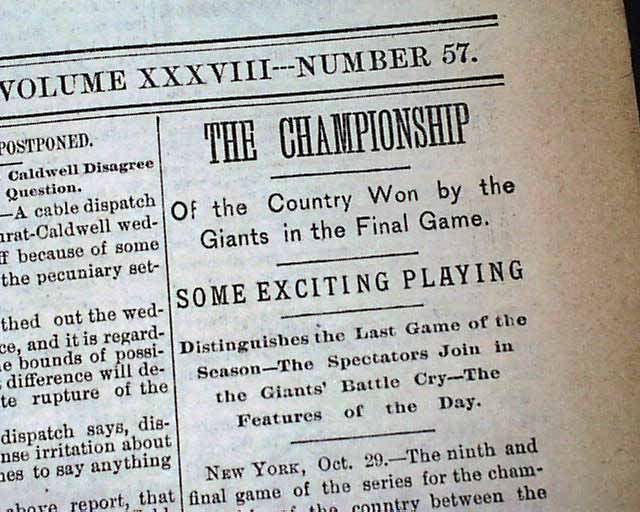 The front page has one column headlines on the front page that include: "THE CHAMPIONSHIP", "Of the Country Won by the Giants in the Final Game", "Some Exciting Playing" and more with box scores. 1st report coverage on game 9 (final) of the 1889 World Series in which the New York Giants won the title. Rare to find such reports as nice as this and on the front page in the early days of baseball.

Other news, sports and various advertisements of the day throughout. Complete in 4 pages, very minor margin wear, otherwise in nice condition.

This Series was part of the pre-modern World Series, an annual competition between the champions of the National League and the American Association. The Giants won this best-of-11-games series, 6 games to 3. The 1889 Series was the first involving solely New York City area clubs, and was part of the continuum of a long-standing rivalry that developed between the clubs in New York, particularly the Giants and the Dodgers. Brooklyn was then a separate city from New York; Brooklyn (and the other three boroughs) would merge with New York City in 1898.

Despite this Series setback, the Brooklyns would come back strong in 1890. The club transferred to the National League, and with the Giants suffering raids by the Players' League, would win the league championship, the first major league club to win consecutive pennants in two different leagues.