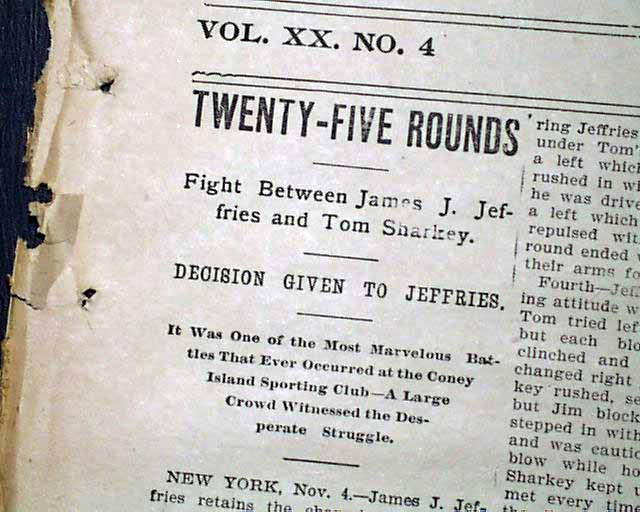 Other news and advertisements of the day. Light browning, a little margin wear, otherwise good condition. Should be handled with care.

wikipedia notes: James Jeffries and Tom Sharkey fought a memorable twenty-five round bout on November 3, 1899 in Coney Island, New York. The match was the first championship fight filmed for motion pictures, and the lights required for the filming were so hot that they burned the hair from the top of both fighters' heads. The last round of the fight was not recorded, however, because the camera operator ran out of film.

The fight was a ring classic. Sharkey took the early lead when he battered the larger Jeffries during the early stages of the bout. Jeffries, however, was very powerful and gained control of the fight in the later rounds. Both fighters, despite suffering severe injuries during the bout went all out in the final round, which most believed was won by Jeffries. In any event the bout was awarded to Jeffries, although many[who?] felt Sharkey had won. During this fight the indomitable Sharkey suffered a broken nose and two broken ribs, and his left ear swelled to the size of a grapefruit. After this fight Jeffries and Sharkey became friends. Jeffries always claimed that Sharkey gave him his hardest fights stating that Sharkey was the roughest, toughest and bravest man he ever fought.