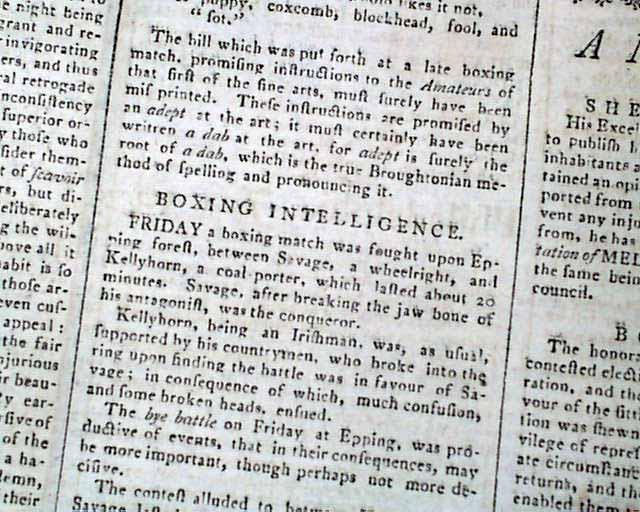 
THE PENNSYLVANIA PACKET, Philadelphia, Jan. 30, 1788  Page 2 has an early report on Daniel Mendoza the Jewish boxer. The report notes in part: "Humphries & Mendoza happened to be present & the former challenged the champion of the Israelites. Mendoza agreed to accept the challenge provided that on weighing, there was no greater difference between them than that allowed...The match then, after Mendoza's declaration, was supposed to be made & the gentlemen present were proceeding to make their betts--when the Jew started a new objection, that Humphries was a stronger & a taller man & that he therefore would not fight him on a stage, but on the turf..." with more (see).
It is rare for us to find items on Mendoza, particularly articles of this length.
Mendoza was so popular that the London press reported news of one of his bouts ahead of the storming of the Bastille which marked the start of the French Revolution. He transformed the English stereotype of a Jew from a weak, defenseless person into someone deserving of respect. He is said to have been the first Jew to talk to the King, George III. He would become the boxing champion of England from 1792 to 1795.
Complete in four pages, untrimmed margins, great condition.