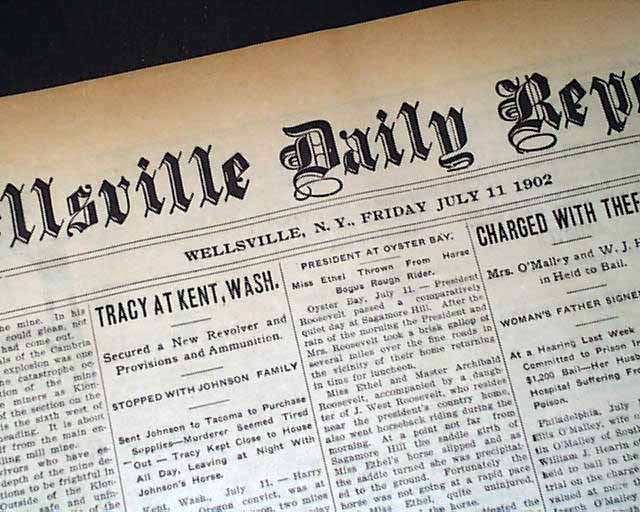 This 4 page newspaper has one column headlines on the front page: "TRACY AT KENT, WASH.", "Secured a New Revolver and Provisions and Ammunition" and more. See photos for text on the hunt for outlaw, Harry Tracy, after one of his infamous escapes.
Other news and advertisements of the day throughout. Light browning, otherwise good condition. Should be handled with care.

wikipedia notes: Harry Tracy (1875-1902) was an outlaw in the closing days of the Old West. His real name was Harry Severns. He is said to have run with Butch Cassidy and the Hole in the Wall Gang, and by the time he'd reached adulthood he was actively taking part in acts of robbery and theft. On March 1, 1898 Tracy and 3 accomplices engaged in a gunfight at Brown's Park Colorado in which posseman Valentine S. Hoy was killed. Tracy and an accomplice of the Brown's Creek gunfight were captured but escaped in June 1898 from the Aspen Colorado Jail. In late 1901, Tracy was captured, convicted, and incarcerated at the Oregon State Penitentiary.
With fellow convict David Merrill he escaped on June 9, 1902, shooting and killing corrections officers Thurston Jones Sr., Bailey Tiffany, Frank Ferrell and three civilians in the process. His claim to infamy is the size and scope of the manhunt and the extensive media coverage of same. He evaded capture for a month, mostly taking refuge in the Seattle, Washington area. On June 28, 1902 he killed his partner Merrill {found July 14}. On July 3, 1902, he set up an ambush near Bothell, Washington, where he killed a detective, Charles Raymond, and deputy John Williams during a shootout. Tracy fled, took several hostages in a residence, and engaged other law enforcement officers in a shootout. During that shootout he killed posse members Cornelious Rowley  and Enoch Breece. On August 6, 1902, in Creston, Washington, Tracy was cornered and shot in the leg during an ambush by a posse from Lincoln County, resulting in his being badly wounded. Sheriff Gardner arrived and had the field that Tracy had crawled into surrounded. Tracy committed suicide to avoid capture.