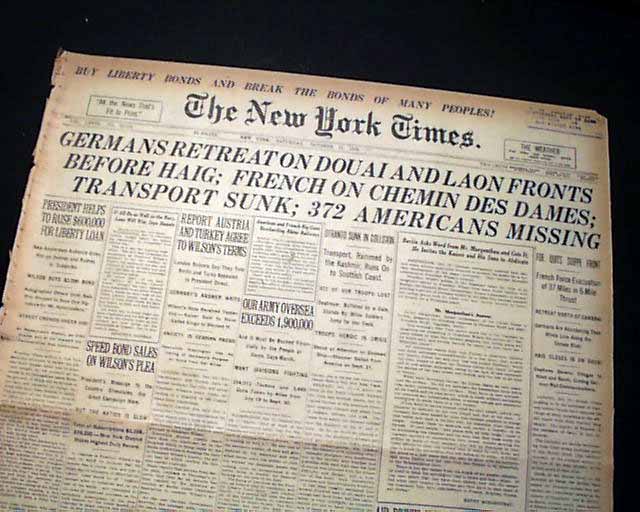 This 24 page newspaper has a nice banner headline on the front page: "TRANSPORT SUNK; 372 AMERICANS MISSING" with subheads (see photos). 1st report coverage on the sinking of the HMS Otranto during World War I.

Other news and various advertisements of the day throughout with much on WWI. Light browning, minor margin wear, otherwise good condition. Should be handled with care.

wikipedia notes: It was during one such operation on 6 October 1918 that she collided with HMS Kashnir, another liner turned troopship, in poor visibility in the rough seas between the North East coast of Ireland and the Western Isles of Scotland. She was holed on the port side forward and, in the heavy swell, began to list. The stricken ship then hit rocks and became grounded. With the heavy seas pounding her continually against the rocks the ship eventually broke up and sank with the loss of 431 lives (351 American troops and 80 British crew members). A number of Americans and crew were saved by a convoy escort, HMS Mounsey, and were taken to Belfast, Ireland. Many of the survivors were hospitalised there until eventual transfer to England. Probably none of the survivors saw action in the Great War as it ended soon afterwards on 11 November 1918. Many of the dead were buried in the Belfast City Cemetery. The American servicemen were exhumed and repatriated to the United States in 1920.