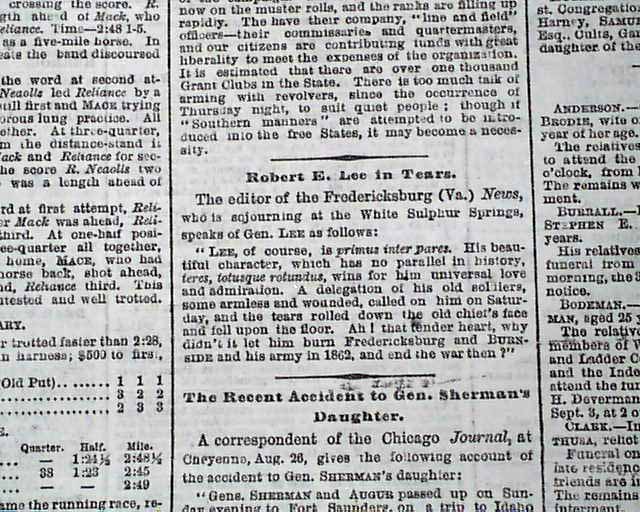 While this issue has much on the first post-14th Amendment national election... along with considerable post-war tensions, page 5 has a brief but interesting letter from the editor of the Fredericksburg News regarding Robert E. Lee which states in part, "Lee of course, is primus inter pares [1st among equals].  His beautiful character, which has no parallel in history... wins for him universal love and admiration.  A delegation of his old soldiers. some armless and wounded, called on him Saturday, and the tears rolled down the old chief's face and fell upon the floor.  Ah! that tender heart, why didn't it let him burn Fredericksburg and Burnside and his army in 1862, and end the war then?"  A touching tribute (with a bit of angst re: the war) to one of the most respected leaders in American history.  Great to have the quote from Fredericksburg, even if printed in a NY paper.

The backpage has a lengthy (more than a column) interview with Nathan Bedford Forrest:  "N.B. Forrest - An Interview with the Rebel Cavalry-Man... He Thinks He can Raise... Half a Million Ku Klux Klan in the South".

Complete in 8 pages and in good condition.

Background (Wiki):  Nathan Bedford Forrest (July 13, 1821 – October 29, 1877) was a lieutenant general in the Confederate Army during the American Civil War. He is remembered both as a self-educated, innovative cavalry leader during the war and as a leading southern advocate in the postwar years. He served as the first Grand Wizard of the Ku Klux Klan, a secret vigilante organization which launched a reign of terrorism against African-Americans, Northerners that had moved to the postwar South, Southerners who supported the Union, and Republicans during the Reconstruction era in the Southern United States.