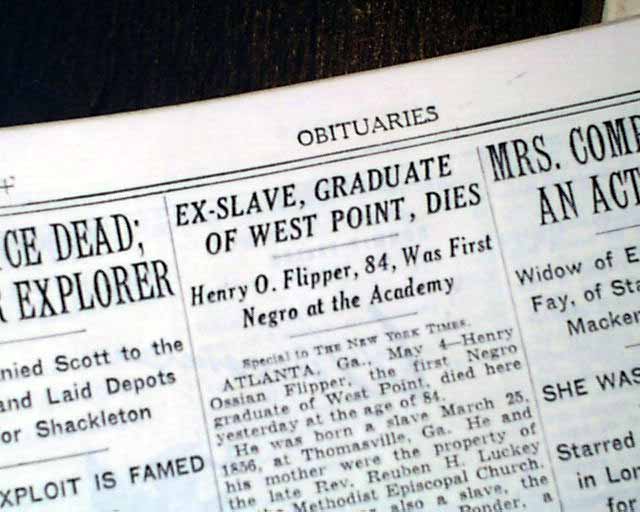 This 70+ page Sunday newspaper has one column headlines on page 52: "EX-SLAVE, GRADUATE OF WEST POINT, DIES"
"Henry O. Flipper, 84, Was First Negro at the Academy". 1st report coverage on the death of the first African American to graduate from West Point Military Academy.

Other news, sports and advertisements of the day throughout. Rag edition, a little creasing on the front page, otherwise nice condition.

Flipper was born into slavery in Thomasville, Georgia on March 21, 1856, the eldest of five brothers. His mother was a slave of the Reverend Reuben H. Lucky, a Methodist minister, and his father, Festus Flipper, a shoemaker and carriage-trimmer, was slave of Ephraim G. Ponder, a wealthy slave dealer.

Flipper attended Atlanta University during Reconstruction. There, as a freshman, Representative J.C. Freeman appointed him to attend West Point, where there were already four other black cadets. The small group had a difficult time at the academy, where they were rejected by the white students. Nevertheless, Flipper persevered and in 1877 became the first of the group to graduate, becoming a second lieutenant in the U.S. Army cavalry. He was assigned to the 10th Cavalry Regiment,[1] one of the four all-black Buffalo Soldier regiments in the army, and became the first black officer to command regular troops in the U.S. Army. (Previously, even all-black regiments were led by white officers).

He was soon sent to Texas and later to Fort Sill in the Indian Territory, where he served as an engineer, supervising the drainage of malaria-infested ponds and the construction of roads and telegraph lines. By 1880, he had worked his way up to the position of quartermaster. Throughout this period, his rise through the ranks was encumbered by racism in the military, though he did have the support of many of the white civilians he encountered, who were impressed by his competency. In 1880, while serving as quartermaster at Fort Davis, Texas, he was brought before a court martial, after money went missing from the post commissary. Realizing that this could be used against him by officers intent on forcing him out of the army, he attempted to hide the discrepancy, which was later discovered. He was charged with embezzlement, and although he was eventually acquitted, he was found guilty of "conduct unbecoming an officer" and in 1882 given a dismissal, the officer equivalent of dishonorable discharge. For the rest of his life, Flipper contested the charges and fought to regain his commission.

After his dismissal, Flipper remained in Texas, working as a civil engineer. In 1898, he volunteered to serve in the Spanish-American War, but requests to restore his commission were ignored by Congress. He spent time in Mexico, and on returning to the United States, he served as an advisor to Senator Albert Fall on the revolutionary politics in that country. When Fall became Secretary of the Interior in 1921, he brought Flipper with him to Washington, D.C. to serve as his assistant.

In 1923 Flipper went to work in Venezuela as an engineer in the petroleum industry. He retired to Atlanta in 1931, and died in 1940.

In 1976, a review board finally granted him a retroactive honorable discharge from the army, and a bust of him was unveiled at West Point. Since then, an annual Henry O. Flipper Award has been granted to graduating cadets at the Academy who exhibit "leadership, self-discipline, and perseverance in the face of unusual difficulties."

Throughout his life, Flipper was a prolific author, writing about scientific topics, the history of the Southwest, and his own experiences. In The Colored Cadet at West Point (1878)[1] he describes his experiences at the military academy. In the posthumous Negro Frontiersman: The Western Memoirs of Henry O. Flipper (1963), he describes his life in Texas and Arizona after his discharge from the army.

As reported by the U.S. Army, in 1976 descendants and supporters applied to the Army Board for the Correction of Military Records on behalf of Lieutenant Flipper. The Board, after stating that it did not have the authority to overturn his court-martial conviction, concluded the conviction and punishment were "unduly harsh and unjust" and recommended that Flipper’s dismissal be changed to a good conduct discharge. The Assistant Secretary of the Army (Manpower and Reserve Affairs) and the Adjutant General approved the Board's findings, conclusions, and recommendations and directed that the Department of the Army issue Lieutenant Flipper a Certificate of Honorable Discharge, dated 30 June 1882, in lieu of his dismissal on the same date. On 21 October 1997, a private law firm filed an application of pardon with the Secretary of the Army on Lieutenant Flipper's behalf. Seven months later, the application was forwarded by the Acting Assistant Secretary of the Army (Manpower and Reserve Affairs) to the Office of the Pardon Attorney at the Department of Justice with a recommendation that the pardon be approved. Many pardon applications had been rejected in the past - as a matter of policy - because the intended recipients were deceased. However, President Bill Clinton pardoned Lieutenant Henry O. Flipper on 19 February 1999.