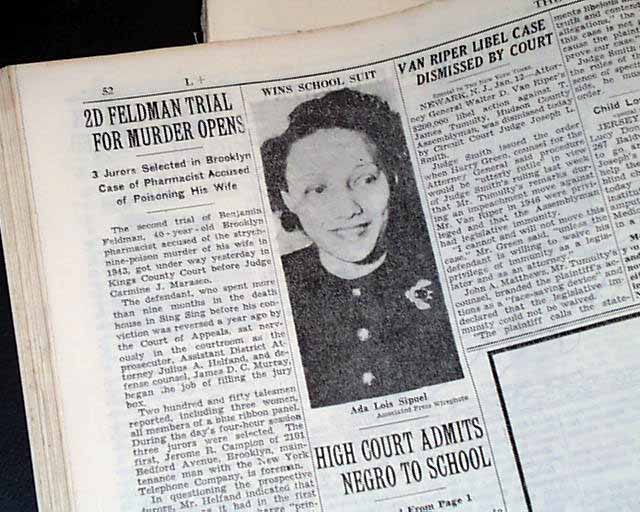 This 52 page newspaper has a two column headline near the bottom of the front page: "Supreme Court Orders Oklahoma to Admit a Negro to Law School". Text continues on the back page (p. 52) with a one column photo of Sipual.

wikipedia notes: Sipuel v. Board of Regents of Univ. of Okla., 332 U.S. 631 (1948)(per curiam), is a United States Supreme Court case that dealt with the Fourteenth Amendment to the United States Constitution.

Ada Lois Sipuel (February 8, 1924 – October 18, 1995), born in Chickasha, Oklahoma was the daughter of a minister. Her brother planned to challenge segregationist policies of the University of Oklahoma, but went to Howard University Law School (in Washington, D.C.) in order not to delay his career further by protracted litigation.

Ada Sipuel was willing to delay her legal career in order to challenge segregation. On January 14, 1946, she applied at the University of Oklahoma (at the time, an all white law school), the only taxpayer funded law school in the State of Oklahoma at the time, and was denied because of race (“color”).

She then petitioned District Court of Cleveland County, Oklahoma. Her writ of mandamus was refused. The Supreme Court of the State of Oklahoma upheld the decision of the lower district court (in 180 P.2d 135), the petitioners then appealed to the United States Supreme Court.

Two years later, in 1948, the United States Supreme Court heard the petition on January 7th and 8th, that stated: “petitioner is entitled to secure legal education afforded by a state institution.” They continued that: “The State must provide it for her in conformity with the equal protection clause of the Fourteenth Amendment and provide it as soon as it does for applicants of any other group.” Citing the 1938 case: Missouri ex rel. Gaines v. Canada - [305 U.S. 337 (1938); a case in which: “Lloyd Gaines, a negro, was refused admission to the School of Law of the State University of Missouri”[1]].

The court ruled, on January 12th, that the state of Oklahoma must provide instruction for Blacks equal to that of Whites, requiring the admission of qualified black students to previously all-white state law schools, reversing the Supreme Court of Oklahoma decision. The same ruling was handed down two years later in a parallel case Sweatt v. Painter - 339 U.S. 629 (1950) (in which Heman Marion Sweatt was refused admission to the University of Texas School of Law on the grounds that the Texas State Constitution prohibited integrated education).

The petitioners, acting on behalf of Miss Sipuel, were Thurgood Marshall of New York City, and Amos Hall, of Tulsa (also on the brief Frank D. Reeves). The respondents, representing the defendants, the university and the State of Oklahoma, were Fred Hansen, of Oklahoma City, the First Assistant Attorney General of Oklahoma, and Maurice H. Merrill, of Norman (also on the brief Mac Q. Williamson, Attorney General). This was a landmark case in the early civil rights movement. The case reversed Lee v. State of Mississippi, and was also a precursor for Brown v. Board of Education - 347 U.S. 483 (1954).

According to Supreme Court Associate Justice John Paul Stevens, who sat in the gallery and watched Marshall argue the case before the court on Thursday, January 8, 1948, Marshall was: “respectful, forceful and persuasive - so persuasive that on the following Monday - only four days after the argument - the Court unanimously ruled in Sipuel's favor.” In addition, Ada Sipuel was: “not only an excellent student, but was welcomed by her classmates who did not agree with the exclusionary policy that the State had unsuccessfully tried to defend.” [2]

A garden, located between Jacobson Hall and Carpenter Hall, on the campus of the University of Oklahoma, now stands in honor of this event.