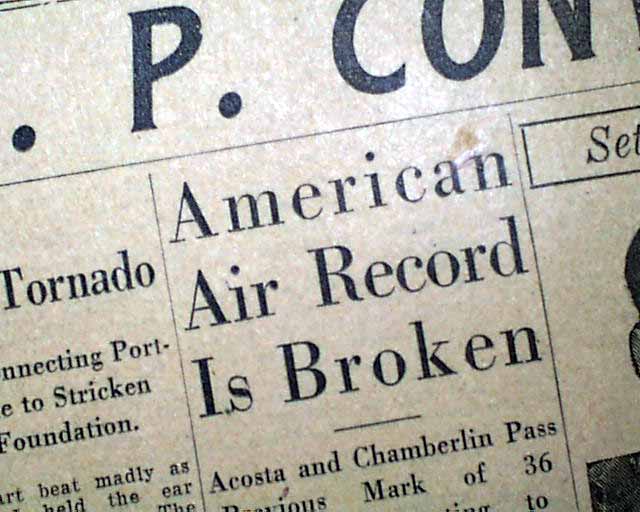 This 20 page newspaper has one column headings headline on the front page that include: "American Air Record Broken"  and  "Acosta and Chamberlin Pass Previous Mark of 36 Hours; Attempting to Shatter World's Figure" and more with photo of Acosta (see). 1st report coverage on the airplane endurance record broken by Bertrand Acosta and Clarance Chamberlin.

Other news of the day throughout. Light browning but otherwise in good condition.

Engineer Giuseppe M. Bellanca of the Columbia Aircraft Corporation had conditioned an elderly yellow-winged monoplane with one Wright motor, and scouted around for pilots. Lieut. Leigh Wade, round-the-world flyer, declined the invitation, saying Mr. Bellanca's plans were too stunt-like, not scientific. Shrugging, Mr. Bellanca engaged Pilots Clarence Duncan Chamberlin and burly Bert Acosta, onetime auto speedster, to test his ship's endurance. Up they put from Mitchel Field, Long Island, with 385 gallons of ethylated (high power) gasoline. All day they droned back and forth over suburbia, circled the Woolworth Building, hovered over Hadley Field, New Jersey, swung back to drop notes on Mitchel Field. All that starry night they wandered slowly around the sky, and all the next day, and through the next night, a muggy, cloudy one. Newsgatherers flew up alongside to shout unintelligible things through megaphones. Messrs. Acosta and Chamberlain were looking tired and oil-blobbed. They swallowed soup and sandwiches, caught catnaps on the mattressed fuel tank, while on and on they droned, almost lazily (about 80 m.p.h.) for they were cruising against time. Not for 51 hours, 11 minutes, 25 seconds, did they coast to earth, having broken the U.S. and world's records for protracted flight. In the same time, conditions favoring, they could have flown from Manhattan to Vienna. They had covered 4,100 miles. To Paris it is 3,600 miles from Manhattan. Jubilant, Engineer Bellanca's employers offered competitors a three-hour headstart in the race to Paris. The Bellanca monoplane's normal cruising speed is 110 m.p.h. She would require only some 35 hours to reach Paris—if she could stay up that long again.