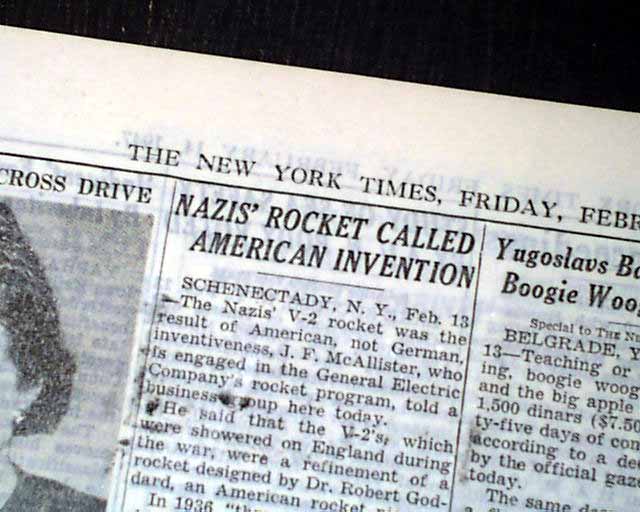 This 44 page newspaper has a one column headline on page 5: "NAZIS' ROCKET CALLED AMERICAN INVENTION".

Other news, sports and advertisements of the day throughout. Rag edition, some tear on pages 3-4 (unrelated), otherwise in great condition.

wikipedia notes: Wernher Magnus Maximilian Freiherr von Braun (March 23, 1912 – June 16, 1977) was a German-American rocket scientist, engineer, space architect, and one of the leading figures in the development of rocket technology in Germany and the United States during and after World War II. A one-time member of the Nazi party and a commissioned SS officer, von Braun would later be regarded as the preeminent rocket engineer of the 20th century in his role with the United States civilian space agency NASA.

In his 20s and early 30s, von Braun was the central figure in Germany's pre-war rocket development programme, responsible for the design and realization of the deadly V-2 combat rocket during World War II. After the war, he and some of his rocket team were taken to the U.S. as part of the then-secret Operation Paperclip. In 1955, ten years after entering the country, von Braun became a naturalized U.S. citizen.